Having completed the consultation process, the Initiative for RECOM launched the second phase of the RECOM Process—the Institutionalization of RECOM. The Regional Team of Public Advocates was established in October 2011. Institutionalization of the Initiative for RECOM entails the transfer of the RECOM Process from civil initiatives to the political level and onto the domain of institutions.
On October 28, 2014, the RECOM delegates submitted to the Coalition for RECOM their Amendments of the RECOM Statute, a document representing a legal framework for the establishment of RECOM. These changes were unanimously supported by the Coalition for RECOM at the Assembly, held on November 14, 2014. In the meantime, elections were held in Bosnia and Herzegovina, whereby new members of the Presidency of Bosnia and Herzegovina were elected. In Croatia, too, a new President was appointed. The Coalition for RECOM now ought to once again seek support for RECOM and for the Amendments to the RECOM Statute, since the newly elected members of the Presidency of Bosnia and Herzegovina and the Croatian president are not bound by the support of their predecessors. The institutionalization phase is on-going.

“States should support the establishment of effective and independent national or regional truth-seeking initiatives. As to existing initiatives, countries of...

On December 10, 2012, the Coalition for RECOM sent a letter to the Presidents and Members of the BH Presidency,...

At its Seventh Assembly, held on November 14, 2014 in Belgrade, the Coalition for RECOM has expressed support for the... 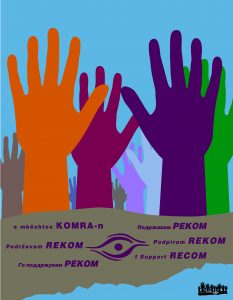 The Presidents’ Personal Envoys to RECOM

President of Croatia Ivo Josipović appointed Zlata Đurđević, Professor at the Faculty of Law of the University of Zagreb, on... 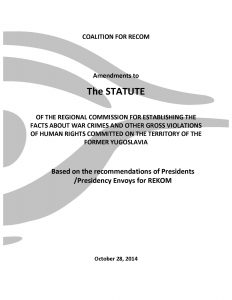 Amendments to the RECOM Statute

The Parliament of Montenegro was the first to offer political support to RECOM Initiative. In the consultation with members of...