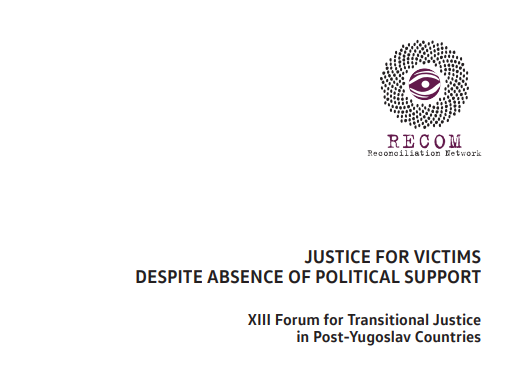 The publication containing a selection of texts by panelists from the XIII Forum for Transitional Justice in Post-Yugoslav Countries, held on December 21 and 22, 2020, can be downloaded HERE.

The 13th Forum for Transitional Justice in Post-Yugoslav Countries was held in the only manner possible—online, thanks to the organisers: the Coalition for RECOM, which was renamed the RECOM Reconciliation Network at previous year’s forum in Zagreb, and the Humanitarian Law Center from Belgrade.

Three panel discussions were held at this year’s Forum.

The discussion “Stocktaking of Transitional Justice – Challenges as Opportunities” addressed the current state of the process of transitional justice in the region, with the following participants: Žarko Puhovski, long-standing advocate of confrontation with the past and the establishment of RECOM, Sabina Čehajić-Clancy, professor of social psychology at Stockholm University, David Hudson, European Commission senior expert, Vjollca Krasniqi, professor at the University of Pristina, and Slađana Lazić, from the Center for Peace Studies at UiT The Arctic University of Norway, who studies crises of transitional justice.

The panel discussion “The Issue of Missing Persons – The Priority of Regional Cooperation” addressed the issues of the fates of missing persons, determining the locations of mass graves, and establishing regional cooperation and international support in the search for mortal remains. The panelists were Manfred Nowak, UN expert, Ivan Grujić, former Head of the Commission on Detainees and Missing Persons of the Republic of Croatia, Ivan Jovanović, leader of the UNDP Regional War Crimes Project, and Nataša Kandić, RECOM Reconciliation Network Coordinator, who presented the results of the study on forced disappearances in Kosovo, in connection with the discovered mass graves. The panel was moderated by Thomas Osorio.