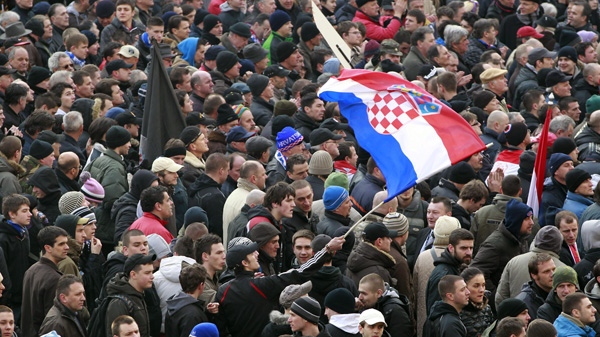 In the day when Croatian Government is negotiating with veteran’s associations, we reminding you on interview with war veteran Zvonko Lucic, who spoke for RECOM’s !Voice about process of reconciliation in the region of Former Yugoslavia.

“In fact, since 1991, one and the same group has had tight control over everything pertaining to the veterans in Croatia. It’s a vicious circle which one can’t enter and in which pretty much nothing changes, and so neither do I do anything, nor am I a member of any organization. No reason to pay for membership where you can’t say anything meaningful,“ says Zvonko Lucic, who spent more than a year on the battlefield near Mostar, where he had responsibility for the group of people who were under his command.

He says that people from the camp, whom he guarded, gave him a cigar holder as a gift, which he still has, in gratitude for fair treatment.

Zvonko points out that after the war he became part of Hvidra (the Association of Croatian Homeland War Invalids) and helped organize the training of veterans for computer literacy, but the programme was shortlived because funds stopped being allocated to it.

Now, he says, he occasionally participates in events organized by the Centre for Nonviolent Action at projects of regional meetings of veterans.

“At first it was very surprising to see people who wore the uniforms of opposite sides together and talking, and it was very difficult, but now it is quite normal and quite easily. I now have friends in all the countries, and someone from among them wherever I go,” he says.

What were the taboo topics for veterans in the first meetings after the war?

People were reluctant to say where they were and in what way they were involved during the war. However, the distance in time and maturity have helped us see that period in a very different way. Thinking about it in a critical way has helped us all. You can’t have yourself sticking only to your own firm position all the time; you have to make a compromise. To learn and accept. I think that by now trust has been built between different groups of veterans in the region, which was unthinkable before.

What was the motivation for the veterans to continue meeting, even though initially they met each other with distrust?

I remember that at the beginning it was unthinkable even that humanitarians should sit down and talk with the people who were in uniform during the war. Many were against these talks. And then it turned out that something could come out of it all, and that veterans too have a lot of potential. Curiosity helped in the beginning, and then what happened was that, when all the sides stepped forward beyond their own positions, and when the differences insisted on by politicians and the media had been excluded, it turned out that it was all essentially the same, all sides were the same. I see more hostility here between the fans of two sport clubs than between us veterans from different countries. These are people who all went through a lot of hardship. Many of them do not have arms or legs. And now, after everything has been said and done, I think they view the past more critically, which is the essential point – to face all this, to face the question of whether it had to be like this, and how to deal with it from now on. Common to all of them is the feeling that they are all somewhat disappointed about what they had been a part of, about what happened and how it all happened. They all paid for it heftily, with personal hardship and everything they now have to go through.

It is often said that the veterans in Croatia are in the best position of all veterans in the region. At the same time, however, Croatia has the highest rate of veteran suicides. How do you see this reality in your country?

We have about 70,000-80,000 war veterans, and they all have benefits on the basis of that status. I know how it was in the war, and I know that in 1995 there were 30,000 of them at the most. It’s a turbo- inflation. Factually speaking, there are people who have not yet been registered, or made use of their rights, so the figure will keep growing. Some have, quite simply, bought this status, or have been helped by those who are in power. It may seem to an outsider that veterans in Croatia do not want a change, that they are doing fine, but this is only an illusion. Essentially, all veteran associations have been established politically, and politics controls them. I was with Hvidra for two terms, and never in that time had there been even a suggestion that some sort of inspection would come to check how the money was being spent – money which was obtained from the state budget. It’s never been some huge amount, but still – no one has kept a record of it. Such associations, just like the church, do not need to worry about how they will present the use of the funds received.

Of course, because reconciliation doesn’t suit politicians. Those who have erected fences now do not want to change, nor do they want the fences to be torn down. There is a political ultimatum – either you’re with us, or you’re alone, and it is well known that anyone who tries to go it alone will be blocked. In fact, there are many people who privately support this story, but when it comes to their association’s voicing the support publically, it is very difficult.

What, for you personally, was the gesture or the event that has contributed most to reconciliation in the region?

When the Croatian President Ivo Josipovic went to Bosnia and Herzegovina and apologized – that was very nice, I think. You can’t spend the rest of your life in a trench you’ve dug at a particular moment. However, resistance to that gesture soon became apparent, and it was obvious he had to do a lot of explaining as to why he had done it, why he went to the village of Ahmici – and of course, that we are not to blame, and so forth. So many people live off that, and people don’t see how things really are, and don’t understand. I once met a man, an engineer, who told me, “I am a Serb by profession”. He said that out of sheer frustration, because in the 1990s he was laid off by the “Koncar” factory because of his ethnicity. Politics remain riveted to the same positions, while certain groups of people remain “by profession” members of their ethnic groups; just as among the war invalids there are those who have received housing benefits several times through various scams, and won’t leave it, because through it they have gained the most in their life.

A lot of the veterans obtained their status while still very young, and have done nothing else since. How should one work with them to build reconciliation ?

The statistics shows that very few among them came from urban environments, but settled there later. In essence, they were in practice being rewarded with their housing opportunity in cities, and by pensions. Politics has determined what he should be in life, and he no longer thinks for himself, nor does he think of the society that will not be able to go on paying for it all forever. We’ve had ten-percent cuts to our pension twice already. At one time during the 2000’s, one billion eight hundred thousand kuna per month was allocated to veteran pensions, and now that amount is over three, or even three and a half billion. The budget simply won’t be able to take that for much longer. And the consequence has been that they have turned from young and healthy into disabled people, even when they were not so. When they asked me to send them the documents and told me to just put my signature to them, I was 35, so I asked them what I was going to do with so many years in retirement? I did not want to sign. Six months later, I found out that I had the right to go to school and not have to pay for tuition. So I graduated from business information school. I sent out four job applications, and got no response. And then the same woman again, before whom I had refused to sign the retirement documents for the first time, asked me, “What are you waiting for? Sign the papers.” And so I retired. I am now into grafting old varieties of apples and pears near Topusko, that’s where the thermal waters are said to be excellent – and, to be honest, that’s what I like much better.

Is there anything else the veterans can do, despite all the problems you are talking about?

I think we as a society are not very active, and so we tend to wait for someone else to do something. That’s the biggest political and veterans’ problem. It is simply a question of how to turn something passive into something active, something that can create its own future. I really don’t know how that can be done.

Do you support the establishment of RECOM?

At first, I took part in the discussions about it, on several occasions. Generally, my attitude at the time was that if the judiciary is doing its job, there was little purpose to such projects. Of course, in the meantime, life has corrected me, and I see that there are many reasons to have RECOM. In fact, it turns out that things are either being suppressed, or not being addressed. So now I think the opposite of what I used to think – that there are many reasons for RECOM, because none of our societies is able to do anything on its own.

Interview was published in !RECOM Initiative Voice 18/2014. Issue was dedicated to the topic  – war veterans and reconciliation.