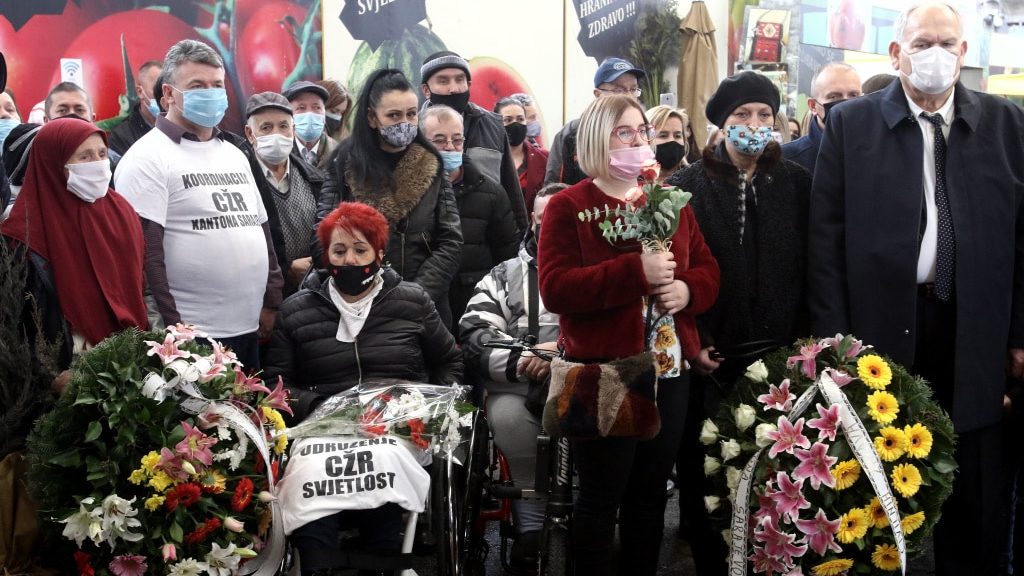 The commemoration on Friday. Photo: BIRN.

Flowers were laid to commemorate the victims of the shelling of the Markale marketplace in the Bosnian capital in February 1994, when 68 people were killed and 142 injured.

Families of the dead, survivors of the shelling, Bosnian politicians and representatives of war victims’ associations laid wreaths on Friday at the site of the massacre at the Markale marketplace to mark its 27th anniversary.

“I must do this, I am obliged to do it, because this cannot be forgotten,” said one of the mourners, Vahida Tvico, who witnessed the massacre on February 5, 1994.

Tvico hid under some market stalls and managed to survive the blast, in which 68 people were killed and 142 others injured.

Court verdicts have established that the shell was fired from Bosnian Serb Army positions.

Forty-three more people were killed and 84 injured in a second attack on the Markale market by Bosnian Serb forces in August 1995.

Former Bosnian Serb political leader Radovan Karadzic was also convicted of terrorising the population of Sarajevo through a long-running campaign of shelling and sniper fire during the siege. Karadzic was jailed for life for these and other crimes.

Former Bosnian Serb military chief Ratko Mladic was convicted of the same charge. He is currently appealing and the final verdict is due in May this year.