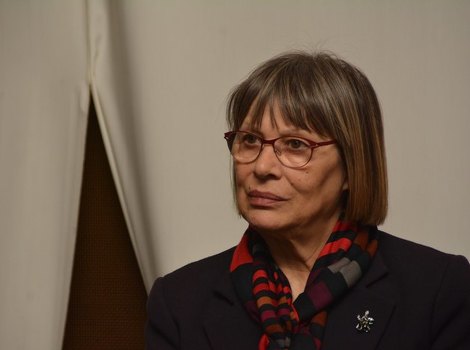 At last year’s ceremony commemorating the 20th anniversary of the Srebrenica genocide, the Mothers of Srebrenica staged a warm welcome for the Serbian Prime Minister Aleksandar Vučić, and even took the opportunity to pin the Flower of Srebrenica to his lapel.  Only  one year later, in an open letter addressed to the same Serbian Prime Minister, the Mothers of Srebrenica state that “those who deny the genocide in Srebrenica are not welcome in Potočari on July 11th”.  The letter goes on to state: “That July 11th of 2015 should have been our day, and you stole it from us.  We will not allow the events of the past year to take place again.”

The mothers who buried their sons need an honest, sympathetic hand-shake, they need to feel that “those others” truly regret that their sons’ lives have been lost.  It was in this spirit that Munira Subašić chose to meet with Prime Minister Vučić last year. And she was the first to apologize for the attack on him, since he was a guest there.  Then comes the matter of  acknowledging the genocide, with  the issue of acquittals.  One  needs first to expose the fraud orchestrated by Serbian politicians, this lie that the acknowledgment of genocide somehow implies that the Serbian people are genocidal by nature.  The pressure on the politicians in Serbia and Republika Srpska to acknowledge that genocide took place in Srebrenica needs to be applied by the civil society,  persistently and with the effective presentation of the court-established facts.  At the same time, the Mothers of Srebrenica need to stop claiming to speak for the dead and to disengage from politics altogether, and instead dedicate themselves to further development of the memorial center in Potočari.