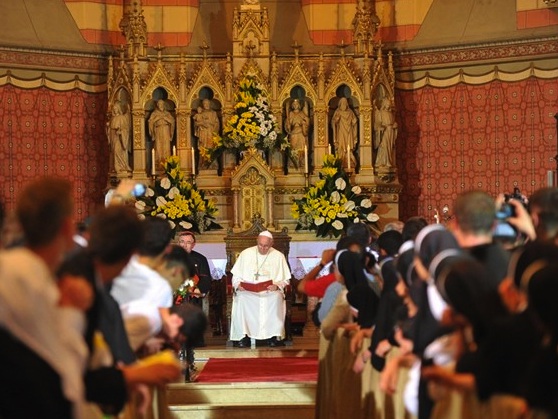 “Through dialogue, a spirit of fraternity is recognized and developed, which unites and favours the promotion of moral values, justice, freedom and peace. Dialogue is a school of humanity and a builder of unity, which helps to build a society founded on tolerance and mutual respect.”

“Interreligious dialogue, before being a discussion of the main themes of faith, is a “conversation about human existence” (ibid.). This conversation shares the experiences of daily life in all its concreteness, with its joys and sufferings, its struggles and hopes; it takes on shared responsibilities; it plans a better future for all. We learn to live together, respecting each other’s differences freely; we know and accept one another’s identity. Through dialogue, a spirit of fraternity is recognized and developed, which unites and favours the promotion of moral values, justice, freedom and peace. Dialogue is a school of humanity and a builder of unity, which helps to build a society founded on tolerance and mutual respect.”

“This city, which in the recent past sadly became a symbol of war and destruction, today, with its variety of peoples, cultures and religions, can become again a sign of unity, a place in which diversity does not represent a threat but rather a resource, an opportunity to grow together. In a world unfortunately rent by conflicts, this land can become a message: attesting that it is possible to live together side by side, in diversity but rooted in a common humanity, building together a future of peace and brotherhood.”

“Let us not be discouraged, however, by the difficulties, but rather continue with perseverance along the way of forgiveness and reconciliation. While we seek to recall the past with honesty, thereby learning the lessons of history, we must also avoid lamentation and recrimination, letting ourselves instead be purified by God who gives us the present and the future: he is our future, he is the ultimate source of peace.”

At the meeting with priests, men and women religious and seminarians gathered in the Cathedral of Sarajevo, Pope again stressed importance of sustainable peace and maintaining process of reconciliation. Following is speech at the Cathedral:

“Dear sisters and brothers, you must not forget your history, not in order to hold grudges, but in order to create peace. Not to consider that history as something strange, but to love as they loved. In your blood, in your vocation, is the vocation and blood of these three martyrs. There is the blood and the vocation of many religious, priests and seminarians. The Apostle Paul, in his letter to the Hebrews, tells us not to forget those who have gone before us, those who have transmitted the Faith to us. These people have transmitted the Faith to you, and taught you how to live the Faith. The Apostle Paul tells us not to forget Jesus Christ, the first martyr. These people have followed in the footsteps of Jesus Christ. We need to restore memory in order to make peace.”

“A few words are lodged in my heart: one of these is “forgiveness”. A man and a woman who consecrate their lives to the Lord, but don’t know how to forgive, are worth nothing. Forgiving an enemy who says something bad to you, or a sister who is jealous, isn’t difficult. But forgiving someone who kicks you and hurts you, who threatens your life with a gun, that is hard to forgive. Yet they did this, and they tell us we should do the same. Something else that stays with me is the 120 days in the concentration camp. How many times the spirit of the world causes us to forget those who have preceded us with their suffering? Those days in the concentration camp were counted by the minute because every minute, every hour, was torture: living together, filthy, without food or water, in the heat and the cold, and for so long. And we who complain when our tooth hurts, or because we want a TV in our room, or more creature comforts, or we gossip about the superior because the food isn’t good enough. Don’t forget the testimonies of those who went before [us]. Think how much they suffered. Think about the six-litre blood transfusion the first priest received in order to keep him alive. Carry a cross that is worthy of Jesus Christ. Worldly sisters, priests and bishops are caricatures who are worth nothing because they do not remember the martyrs. They don’t remember Jesus Christ crucified who is our only glory.”

“I think of (the story we were told about) the militiaman who gave a pear to the sister, and the Muslim woman who lives in America now, and who fed the priest. We are all brothers and sisters, even that cruel man. I don’t know what he was thinking, but he felt the Holy Spirit. Maybe he remembered his mother when he gave that pear to the sister. And that Muslim woman who went beyond religious difference, she believed in God. Seek the God of all. We all have the possibility to seek the seeds of Good, because we are all Children of God. Blessed are you who have these witnesses so close to you. Please never forget them. May our lives grow though these memories. I think of the priest whose parents and sister died, he was left alone but he was the fruit of love, marital love. I think of the sister, she too was a daughter. I think of what the Cardinal Archbishop said: what happens to the Garden of Life? Why doesn’t it flourish? Pray for families so that they may flourish with many children and that there may be many vocations.”

“Finally, I would like to tell you that what we have heard is a story of cruelty. Today, in wars around the world, we see so much cruelty. Be the opposite of cruel: be tender, fraternal, forgiving. And carry the cross of Jesus Christ. That’s what Holy Mother Church wants of you: to be small martyrs, small witnesses of the Cross of Christ. May God bless you and please pray for me.”