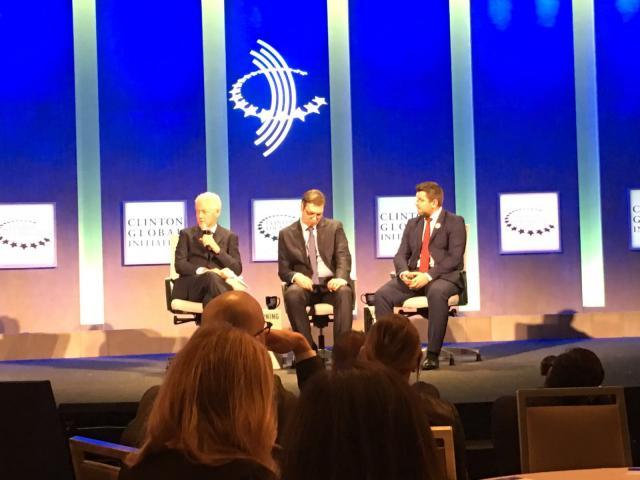 A discussion on Srebrenica was held as part of the Clinton Global Initiative gathering in New York, in which Aleksandar Vucic and Camil Durakovic took part.

B92 reporter said that the debate “The Balkans – 20 Years Later” was moderated by Bill Clinton, while the first to speak was Advika Ibrahimovic who survived the Srebrenica genocide.

She told the audience about losing both parents in the war, while the Serbian prime minister agreed that her story was terrible.

“I’m a proud Serb, even though her story is terrible. We have made steps towards reconciliation in the region,” he said.

Vucic added that he was ready to talk to safeguard peace and stability.

“I would like all those who are guilty for the war be arrested,” said Vucic.

“We need each other, otherwise we will face catastrophe,” said Vucic, adding that he would be concerned about the future of the Western Balkans otherwise.

As he said, it was not easy for him to come to New York, considering that Bill Clinton was the president of the United States when Serbia was bombed (by NATO).

Many in Serbia, he said, have criticized me for deciding to go to New York and participate in a panel discussing the region, but also the crime in Srebrenica.

“I told them that I had to talk to everyone, today there are two approaches in Bosnia, one is among the Bosniaks (Muslims), of which there are 1.7 or 1.8 million (people), and they say – we are stronger than the Serbs, we can force them out again – and that you hear every day. On the other hand there are seven million Serbs in Serbia and they also say – we can beat them,” explained Vucic.

And that, he said, represented a difficult situation, but also the reality, and that is why he insists on having as many meeting and agreement with the Bosniaks as possible.

“I stand in favor of talks between Serbs and Bosniaks, because we cannot live without one another, we have to live together, not next to each other, but with each other and I say this everywhere, both in Belgrade and Sarajevo, and right here in New York,” he said.

The Serbian prime minister said that he would always be able to talk to Camil Durakovic, who currently serves as president of the Srebrenica municipality, and that Serbia will do everything it can to preserve peace and stability in the region, but added that it may be more difficult now than a year ago or 20 years ago, and is becoming increasingly difficult.

“We have to invest a lot of courage, the atmosphere in the region is not good and I hope there will be a more objective approach and that we will all be able to accept our mistakes and admit difficult things that we have done, in order to overcome all the difficulties,” said Vucic.

He pointed out that Serbia will do everything it can to preserve the stability and peace and that Camil Durakovic knows he can count on it.

He reminded the panel that the Serbian government pledged to donate five million euros to Srebrenica, of which it has already provided two million.

Camil Durakovic said that history was difficult for all the peoples of the former Yugoslavia, but that he was proud to represent people who now live in peace.

“I, too could have stayed in America and lived well here, but I decided to go back,” he said.

Speaking about Vucic, he said: “It was a difficult decision for his personally to come among the 7,000 graves and say he was sorry, and for that reason he is a brave man. I repeat this in front of everyone. And for me it was not easy to embrace him among the 7,000 graves, but I did it, and that’s why I’m brave. Many have criticized me for that.”

“But, all those in the Balkans who think that there is an alternative to peace, do not know that if we want reconciliation and a better future, then we need to shake hands and embrace,” said Durakovic.

He added that his vision with the arrival in Srebrenica was to change the future.

“Instead of the stories about the past, about who killed whom and how, to change our future for the next 100 years. Vucic and I have the same thoughts,” Durakovic said.

Clinton also spoke to tell of his view of last year’s commemoration in Srebrenica, and said that Durakovic had invited Vucic, which he sad was a very courageous move.

The former U.S. president recalled that after the incident in Potocari – when Vucic was attacked – the leadership of Bosnia-Herzegovina visited Belgrade and Serbian government officials went to Srebrenica, which he also said were very courageous steps in the reconciliation process.

“They take risks in a political but also in a personal sense and therefore deserve our support. They know that peace works better than war and in this world we need to hear their message everywhere,” said Clinton, adding that it was not up to others to deal with the details, but to create conditions and support the Balkan region in the reconciliation process.

The discussion was also attended by Bakir Izetbegovic, who currently chairs the Presidency of Bosnia-Herzegovina.