On December 21 and 22, the RECOM Reconciliation Network and Humanitarian Law Center are organising the XIII Forum for Transitional Justice in post-Yugoslav Countries.

The Forum for Transitional Justice is a platform for discussing contemporary topics related to different aspects of transitional justice in the post-Yugoslav space. This year, it is being held as an online event on the KUDO platform.

In three panels, the Forum participants will be discussing transitional justice in the region, as well as memorialisation, commemorations and the issue of missing persons in post-Yugoslav countries.

On the first day, December 21, two panels will be held. 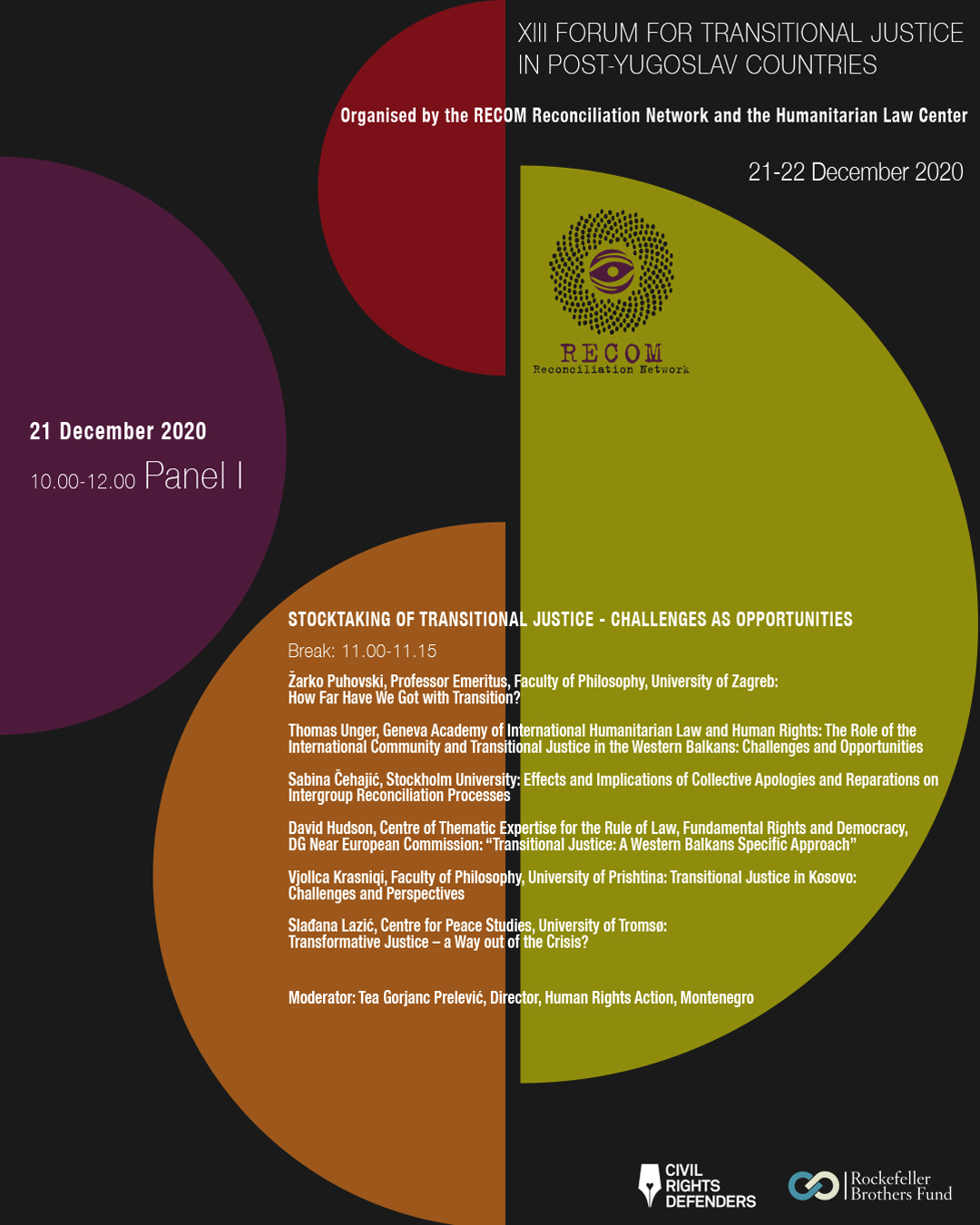 Žarko Puhovski  is a long-standing university professor at the Department of Philosophy of the Faculty of Philosophy in Zagreb, a philosopher, political scientist, human rights activist and political analyst.

Thomas Unger is the Co-Director of the Master of Advanced Studies in Transitional Justice, Human Rights and the Rule of Law at the Geneva Academy of International Humanitarian Law and Human Rights. He is the former Senior Adviser to the UN Special Rapporteur on the promotion of truth, justice, reparation and guarantees of non-recurrence.

Sabina Čehajić works as an associate professor of social psychology at Stockholm University. She is also affiliated with Sarajevo School of Science and Technology in Bosnia and Herzegovina, associated with psychophysiology lab at Stanford University and the emotion lab at Karolinska Institute.  Together, they examine psychological processes of intergroup behaviour in complex social situations such as conflict.

David Hudson has worked since November 2014 in the Strategy Unit of the European Commission’s Directorate-General for Neighbourhood and Enlargement Negotiations. Within the unit, he has a particular responsibility for post-conflict issues in the Western Balkans within the Justice and Fundamental Rights Centre of Excellence.

Vjollca Krasniqi  is Associate Professor at the Faculty of Philosophy, University of Prishtina. Her research interests are gender, nation-building, human rights, post-war justice, and social policy. She has led and participated in numerous international research projects and published widely on these issues.

Slađana Lazić  is a post-doctoral research fellow at the Centre for Peace Studies (CPS), University in Tromsø, Norway. Her research and teaching interests include transitional justice, peacebuilding, gender, intersectionality, and memory politics with a geographical focus on post-Yugoslav context and Colombia.

Tea Gorjanc Prelević is a long-term human rights activist in Serbia and Montenegro. She was the first director of the Centre for Training in Judiciary and State Prosecution in Montenegro and has contributed importantly to advocating torture, war crimes and violation of freedom of expression victims in Montenegro. She is also a RECOM member since its founding.

The second panel has memorialisation as its topic. “Politics of Memory and Commemorations of Victims“. The panellist will be analysing official memory politics and war crimes commemorations in Bosnia and Herzegovina, Croatia, Serbia and Kosovo, focusing especially on victims commemoration and instrumentalisation. 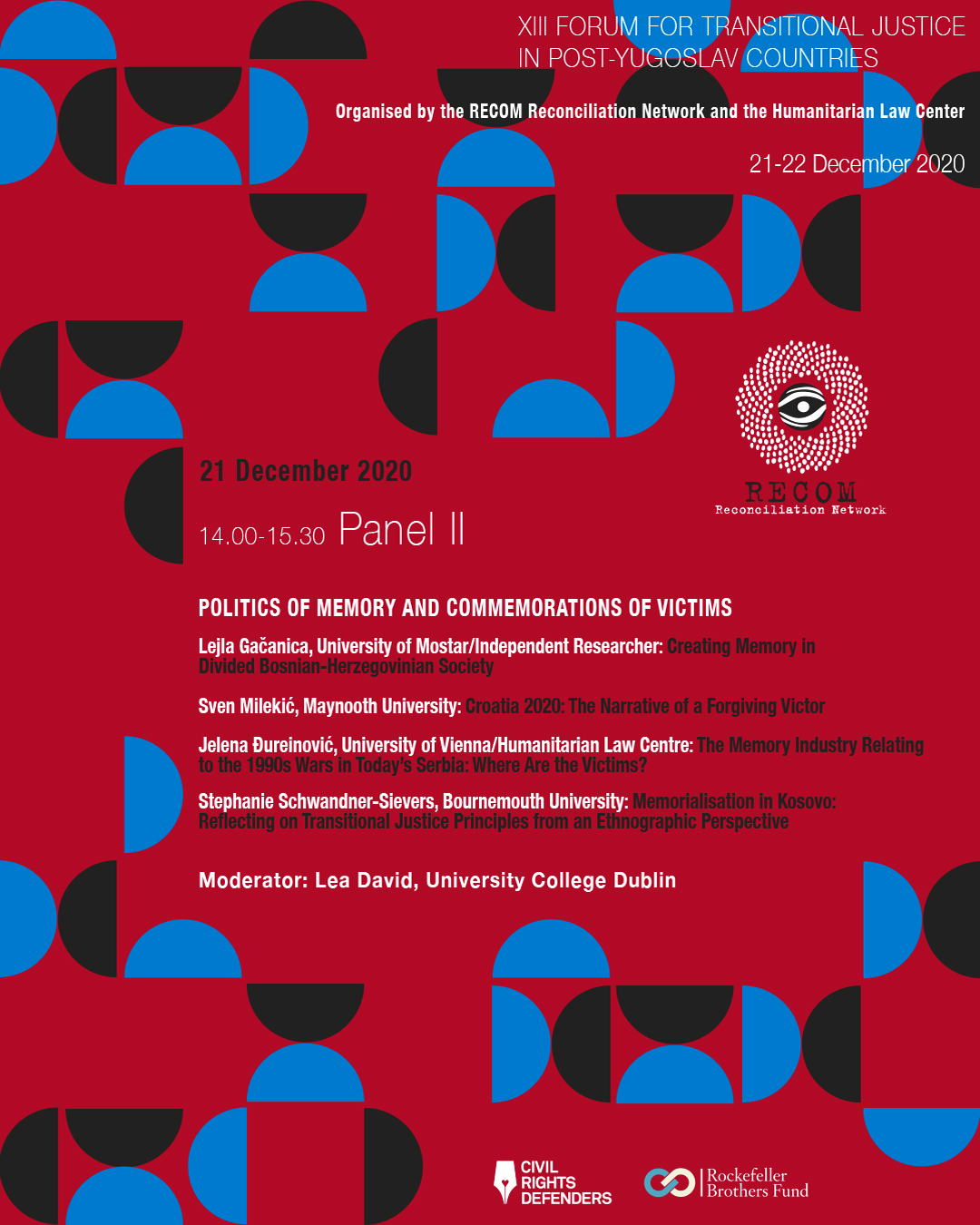 Lejla Gačanica a PhD candidate and is currently working as a legal advisor and independent researcher. She is interested in facing the past with a special focus on the culture of remembrance, human rights and constitutional law. She is the author of published articles and analytical, scientific and research works in these fields.

Sven Milekić is enrolled in the PhD programme in the Department of History at Maynooth University. The proposed dissertation project is titled “Defenders of the Homeland: How Croatian Veterans of the War of the 1990s Kept the Dominant War Narrative Alive“.

Jelena Đureinović is a postdoctoral researcher and Scientific Coordinator of the Research Platform Transformations and Eastern Europe at the University of Vienna. Her main research interests include memory studies, nationalism studies, postsocialism, history of Yugoslavia and the post-Yugoslav space.

Stephanie Schwandner-Sievers is a  principle academic at Bournemouth University (BU), United Kingdom, is a social anthropologist with a long history of ethnographic research with and among Albanians in the wider region. Recent works have focused on questions of epistemic justice and everyday nationalism;  social memory and transitional justice, when researching post-war memory, international intervention and conflict transformation in Kosovo.

Lea David is Assistant Professor and Ad Astra Fellow at the School of Sociology, University College Dublin. She is a comparative historical sociologist with a strong interdisciplinary background in cultural anthropology and history.

Her research interests cover memory, nationalism, human rights, ideologies, solidarity, activism, the intersection between the Holocaust and genocide, and conflicts in the former Yugoslav countries and in Israel/Palestine.

The panel on missing persons, “The Issue of Missing Persons – The Priority of Regional Cooperation“, will be held on the second day of the Forum, December 22. In this panel, the participants will be speaking of the missing persons in the ex-Yugoslavia region and the issue of remembering those whose mortal remains have never been found.

Manfred Nowak is the Secretary General of the Global Campus of Human Rights, as well as former judge at the Human Rights Chamber for Bosnia and Herzegovina (1996-2003) and UN Expert in Charge of the Special Process on Missing Persons in the Former Yugoslavia (1994-1997).

Ivan Jovanović is the coordinator of the UNDP’s Regional War Crimes Project. He is a consultant, trainer and lecturer on international humanitarian law, international criminal law, transitional justice and criminal law.

Ivan Grujić was the President of the Commission of the Government of the Republic of Croatia for Detainees and Missing Persons from 1993 to 2016. During this period, the number of detainees and missing persons in Croatia has decreased from over 14,000 to 1,600. Also, during his tenure, extensive documentation on war crimes in Croatia was collected, which was used in cases before the International Criminal Tribunal for the former Yugoslavia and the International Court of Justice.

Nataša Kandić is the Founder of the HLC and the coordinator of the RECOM Reconciliation Network. She has been working on the research and documentation of war crimes and other serious violations of human rights committed on the territory of the former Yugoslavia. Her work as human rights and transitional justice advocate has been acknowledged with more than 20 international, regional and national awards.

Thomas Osorio is a Research Fellow at KU Leuven in Belgium and an expert for transitional justice in the former Yugoslav countries. He served for 23 years in the countries of the former Yugoslavia as UN Rule of Law and Transitional Justice Adviser to UNDP, Human Rights investigator for the Office of the UN High Commissioner for Human Rights, Investigations Coordinator for the UN Commission of Experts for the Investigation of War Crimes (known as the Bassiouni Commission), Head of Mission to Croatia for the International Criminal Tribunal for the former Yugoslavia (ICTY) and operations officer in charge of exhumations conducted by the ICTY on the territory of Croatia.