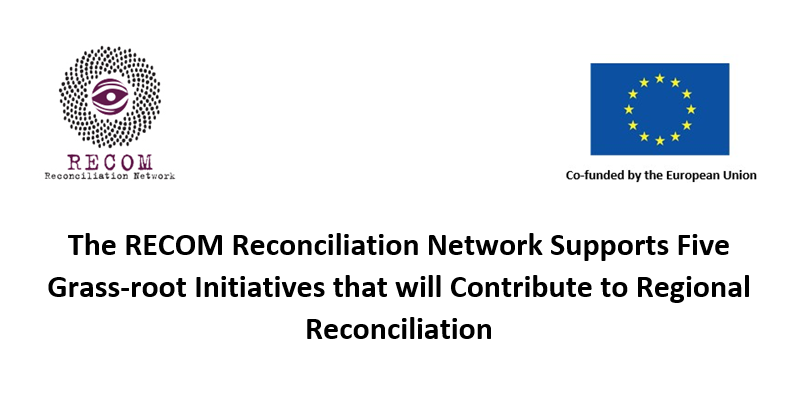 Within the sub-granting programme “Supporting Grass-root Civil Society Actors in Transitional Justice Initiatives and Confidence-building in the Western Balkans – RECOM Reconciliation Network”, five initiatives have been selected as a result of the first Call for proposals: Forgotten Children of War Association (Bosnia and Herzegovina) and project: “Symbols of the Lost Past”; GAIA (Kosovo) and project “Challenging Propaganda through Remembrance”; Advocacy Center for Democratic Culture – ACDC (Kosovo) and project “Dealing with the Past and Reconciliation in Kosovo through Raising Awareness on Missing Persons Issue”; Vojvodina Civic Centre (Serbia) and short movie “Milena”; and Comics center Macedonia (North Macedonia) and project “All we are saying is ‘Give reconciliation a chanceʾ”.

“Symbols of the Lost Past” addresses, as main problem, predominant men-oriented culture of remembrance in Bosnia and Herzegovina that neglects wartime experiences of the rest. Their objective is to promote different culture of remembrance, more inclusive toward women and children, acknowledging their wartime-related suffer through sharing their personal experiences in form of a Living libraries with 15 participants from University of Sarajevo.

“Challenging Propaganda through Remembrance” has an aim of countering biased narratives and misinterpretations leading to escalation of ethnic tensions in Kosovo. It will be carried out through seminar of young participants (21-30 years old), human libraries and exhibition that will present selected press headlines and propaganda news related to violent events from 1998 to 2004 in Mitrovica.

“Dealing with the Past and Reconciliation in Kosovo through Raising Awareness on Missing Persons Issue” will include five focus groups with representatives of civil society, media and academics that will try to offer solution on how to stop manipulation of this issue for political purposes; call for Op-Ed planning to translate and publish best four articles and media promotion through two broadcasts.

“Short documentary ‘Milena’” depicts forceful mobilization of refugees from Croatia and Bosnia and Herzegovina and issues of guilt, responsibility, price of freedom. Objective is awareness-raising about established facts through artistic form such as movie for audience that is receptive to art but and was not targeted so far.

Comics center Macedonia (North Macedonia) has, like previous project, an aim to overcome the lack of creativity in promoting topics of regional reconciliation, transitional justice and dealing with the past by publishing comics on regional reconciliation and opening call for young applicants with their comics, followed by exhibition and other types of promotion.

In total 70 organisations submitted applications and project proposals from September 1 to October 16 2021: 16 from Bosnia and Herzegovina, 12 from Montenegro, 14 from North Macedonia, 14 from Kosovo and 14 from Serbia. Selection team for evaluation, consisting of partner organisations’ representatives selected 24 (November 10, 2021) and invited them to participate in capacity building and project development workshops.

During five-days workshops (December 6 – 10, 2021) they had an opportunity to listen to Marijana Toma, historian, on transitional justice instruments; Ana Milošević, Post-doctoral Researcher at the University of Leuven on Europeanisation on politics of memory in the Western Balkans; two following sessions were dedicated to introducing good practice from other regions to participants through workshop on civil society truth-telling from a victim-centred approach facilitated by Mr. Dario Colmenares Millán, Program Director for the Global Initiative for Justice, Truth and Reconciliation (GIJTR). During last three days, organisations had time to present their project proposals and to receive some questions and comments from Ana Marjanović Rudan, project development expert, but also from other participants, with an aim to help them to fine-tune and finalise their project proposals by mapping and planning specific activities and schedule in form of an action plan. After workshops, in response to the RRN’s request, 19 organisations submitted finalised project proposal, action plan and draft budget within given deadline (January 15, 2022).

Second evaluation in form of additional, unbiased assessment of the projects’ and action plans’ quality was performed by expert team and as a result, on January 30, it was decided that five projects will be financially supported by the RECOM Reconciliation Network – one from North Macedonia, one from Serbia, one from Bosnia and Herzegovina and two from Kosovo; and that the second Call for proposals will follow in March for another 12 special initiatives contributing to dealing with the past, transitional justice and reconciliation.

The sub-granting programme is part of the project “Supporting Grass-root Civil Society Actors in Transitional Justice Initiatives and Confidence-building in the Western Balkans – RECOM Reconciliation Network” financially supported by the European Union.