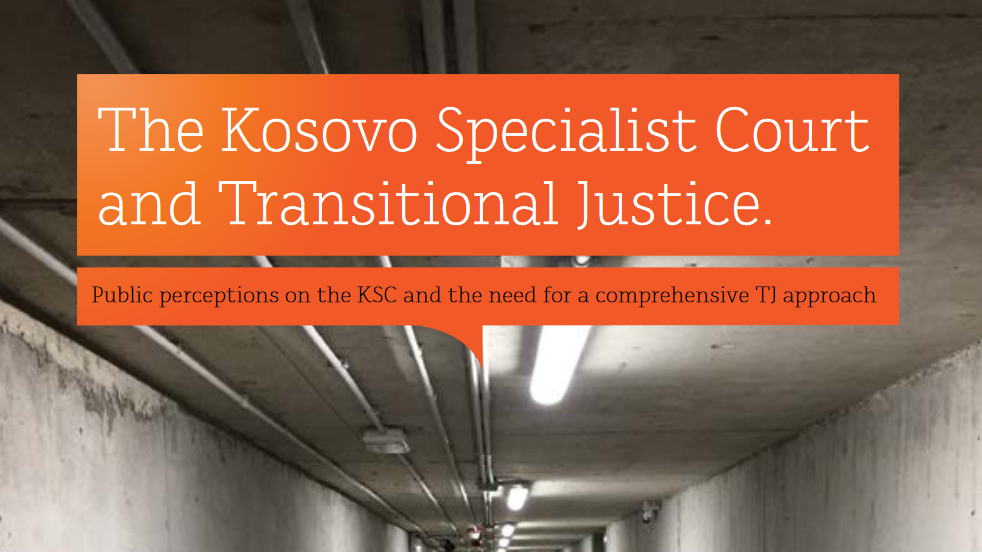 The Kosovo Specialist Court and Transitional Justice: Public perceptions on the KSC and the need for a comprehensive TJ approach

The Kosovo Specialist Chambers and Specialist prosecutor’s Office (‘Kosovo Specialist Court’), set up in 2015, is the most recent mechanism to adjudicate war crimes and crimes against humanity related to the Kosovo War of 1998-1999. Most efforts to deal with the wartime past in Kosovo have focused on war crimes prosecution, without investing much in other transitional justice mechanisms to support society to move towards a more peaceful future. Previous international courts, and domestic courts in both Kosovo and Serbia, only managed to prosecute a relatively small number of serious crimes. As a result, they did not live up to expectations of many victims and did not do much to restore trust in justice processes amongst citizens. Worse, in both Kosovo and Serbia acquitted suspects or convicted perpetrators are regarded as heroes and many managed to stay or return to political power positions. On both sides, the political nationalist discourse is framed to a great extent by this wartime past which defines exclusive victim and perpetrator narratives.

The Kosovo Specialist Court was created in a response to serious allegations that the leadership of the former Kosovo Liberation Army (KLA), most of whom turned politicians after the war, had been involved in serious crimes against Serbs, other minorities and Albanian opponents. The KSC functions within the Kosovo judicial system but incorporates international humanitarian law and operates fully independent. The decision to establish this separate hybrid judicial entity has been subject of much criticism and was not just a legal or human rights consideration but also a political one: with Kosovo on the EU accession list, the EU had to support investigating these serious allegations, after the earlier EU-supported rule of law mechanisms in Kosovo had avoided going after the ‘big fish’. The alleged crimes deserve to be criminally investigated and prosecuted so justice is served to the victims. However, the design of the KSC failed on an important aspect: it only looks into the crimes allegedly committed by one party to the conflict. Its limited mandate to only prosecute crimes related to the KLA is the main issue for the KSC to be accepted by a broad section of Kosovo society.

After relative quiet years since 2015, a new phase for the KSC started in 2020 when the first filings of indictments were announced. To test the public opinion in Kosovo of the KSC, PAX and Integra initiated a public perception survey in September 2020, and compare its findings with the 2017 perception survey which had found little public understanding of the KSC. The 2020 data show that there is still limited understanding in Kosovo of the KSC’s mandate. Among K-Albanians trust in KSC to deliver justice is lowered, while among K-Serbs this increased slightly. This might be related to influence of the ethno-nationalist discourse around the KSC summoning in 2019 and 2020, with the majority of K-Albanians being of the opinion that KSC’s mandate is unfair, while many K-Serbs and K-Others consider it fair. The differences in trust expressed, point to the likelihood that different ethnic groups will view the outcomes of KSC’s trials differently.

The main argument of this report is that the predominant focus on war crimes trials to deal with the violent past in Kosovo has done little to deal with the past at a societal level to progress as a peaceful, inclusive and forward looking society. There has been a lack of investment in other important aspects, such as: truth-seeking and documentation, commemoration, reparations and compensation, as well as recognition and support for all the victims and survivors of the conflict regardless of their identity and status. All these transitional justice dimensions need to be addressed in and by themselves to help Kosovan society move towards a more peaceful future. With its partial mandate, the KSC will not contribute much to this end, except for potentially removing certain political leaders from the system. Whether the KSC can contribute positively in a broader sense, next to providing a measure of justice for victims, will depend on the way it is able to explain its mandate and the court proceedings in a context of polarized politics around it. In light of the current KSC proceedings, it is high time for the Kosovo government and its international supporters to invest in a comprehensive approach to dealing with the past. The final chapter of this report provides recommendations to diverse stakeholders, of which the most important ones are:

THE KOSOVO SPECIALIST COURT should intensify its outreach and public dialogue program in Kosovo, Serbia and other countries in the Western Balkans; re-consider establishing a permanent presence of the Specialist Chambers in Kosovo; ensure timely and effective indictments, trials and judgments in full compliance with the applicable laws; and avoid any suspicion of political influence or prejudice over KSC’s decisions and proceedings.

THE KOSOVO GOVERNMENT should take responsibility for the KSC as part of Kosovo’s legal system and cooperate fully to ensure justice is done to the victims; show sincere commitment to the European Commission’s requirement to develop an overarching strategy for transitional justice as part of the EU accession process, by investing in a deliberative infrastructure for dealing with the past (I4DwP) in Kosovo which entails the primacy of victim- and survivor-centred approaches, greater gender equality and sensitivity, and de-ethnicization, depoliticization, and de-personalisation of DwP initiatives. It should also establish a parliamentary committee on dealing with the past with the function to monitor and report on government’s progress.

THE EU AND KEY INTERNATIONAL STAKEHOLDERS IN KOSOVO should support a robust and comprehensive effort for DwP in Kosovo by investing political, bureaucratic and financial resources in promoting a national framework for dealing with the past, so Kosovo can live up to the European Commission’s requirement; monitor Kosovo’s and Serbia’s progress in dealing with the past and inclusive transitional justice practices explicitly, as part of their EU accession process. Also, the EU-facilitated dialogue for normalization of relations between Serbia and Kosovo must address the pressing and outstanding issues for dealing with the past.

CIVIL SOCIETY IN KOSOVO should continue to work with the KSC outreach team to achieve transparent and correct communication and information dissemination to the broader Kosovan society; and work together in a coalition to advancing a citizen-centred and inclusive national strategy for transitional justice in Kosovo, through engagement with diverse victim communities, joint lobby towards the Government and international actors, as well as invest in outreach campaigns that combat nationalist and exclusionary narratives.