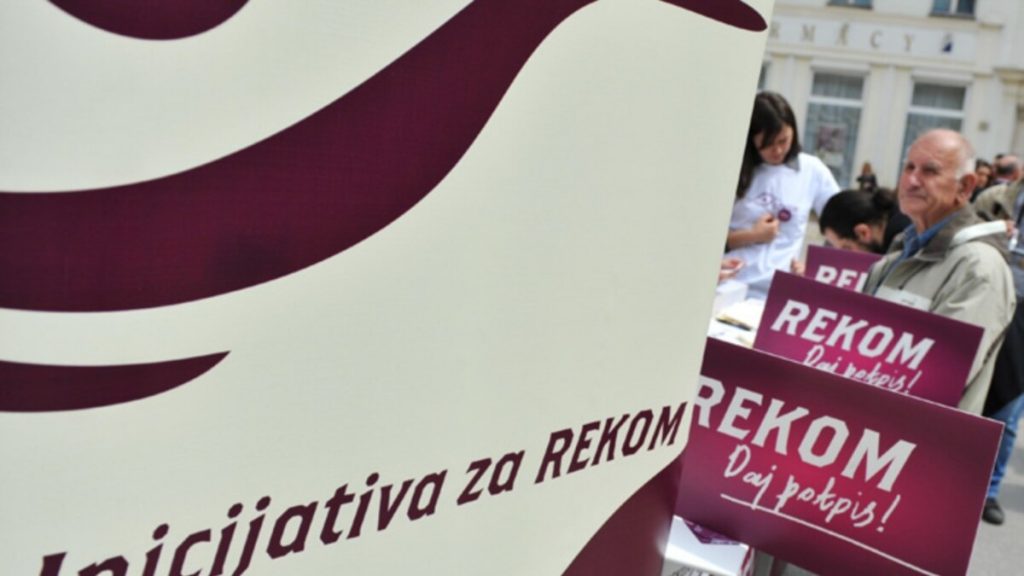 Socioeconomic issues have become an increasingly important topic in transitional justice. A new research project developed in collaboration between PCRC and Royal Holloway, University of London, explores how they have been debated in the context of the Initiative for RECOM.

The socioeconomic dimension of transitional justice

For many communities affected by conflict, socioeconomic issues are central to efforts at dealing with the past. But what do we mean exactly by socioeconomic issues in transitional justice? They can include the provision of socioeconomic remedies – such as reparation or material compensation – in the aftermath of conflict. They can also refer to how communities experience forms of violence or injustice during conflict that we could define as socioeconomic in nature, such as the destruction of one’s home or being deprived of basic means of subsistence. The socioeconomic dimension of transitional justice is also tightly linked to the political economy of conflict – how groups use economic means for military purposes, and how the economy changes during war – and also of the post-war period, when the economic system is reconstructed and often reformed in ways that can affect the scope and success of transitional justice processes.

In practice, transitional justice mechanisms have been less focused on these socioeconomic issues compared to, for example, judicial accountability for war crimes, crimes against humanity and genocide. This is particularly prominent in the case of the former Yugoslavia, where the international community concentrated its efforts on the International Criminal Tribunal for the former Yugoslavia – including by tying EU accession conditionality to cooperation with the Tribunal. However, more recent research has started giving us important insights into how important these issues are in the former Yugoslav region.

The role of RECOM

The Initiative for RECOM was set up by three leading NGOs (Documenta from Zagreb, the Humanitarian Law Center from Belgrade and the Research and Documentation Center from Sarajevo) to advocate for the establishment of a Regional Commission for the establishment of facts about war crimes and other serious violations of human rights committed during the Yugoslav wars that took place between 1991 and 2001. As they expanded the Coalition of organisations across the whole region, they organised consultations to gather support for the Initiative and to discuss the set up and scope of a future Commission. This process ended up involving thousands of representatives from the civil society from across the region who took part in 128 consultation meetings. For this reason the RECOM process has been researched by scholars interested in the potential of such a regional transitional justice mechanism, the extent to which it better represents a ‘bottom-up’ approach to TJ or better responds to local needs other TJ mechanisms such as the ICTY.

While the goal of establishing a Regional Commission has not been achieved and might seem elusive, the consultation process in itself constituted an important avenue for local communities, victims, young people, and other sectors of the civil society to debate the question of dealing with the past in the former Yugoslav region. The consultations offered the opportunity to discuss not only the mandate of RECOM but also experiences, needs and expectations from local communities and organisations. Researchers often see the RECOM consultations as a TJ deliberative setting that can give us important insights into how ideas about justice, truth, and peace are socially constructed. Research on RECOM so far has tackled many questions (from reconciliation to gender, the composition and inclusivity of the initiative and differences between local, national and regional debates). However, the socioeconomic dimension of TJ has not been central in RECOM research thus far. Even a cursory glance at some of the transcripts, however, reveal that socioeconomic issues were present, albeit not dominant, in debates, and thus deserve further attention and research.

Previous research on RECOM has been conducted through a variety of research methods. Some of it has relied on interviews with participants and non-participants to the initiative. A large body of work has relied on the wealth of data provided by transcripts of consultation meetings held between 2006 and 2011 across the region. The challenge of working with these consultation transcripts is the sheer amount of text that they produced. Due to this, some researchers have used quantitative or mixed methods approaches to analyse the data, while others have opted for a more qualitative analysis of a smaller sample of transcripts. Each of these methods can have advantages and shortcomings and be more suited to specific kinds of research questions.

This project also focuses on transcript analysis. A team of researchers from PCRC read through 61 RECOM transcripts and carried out a preliminary analysis based on a coding sheet prepared the project lead based at Royal Holloway, Dr Daniela Lai. This initial phase was funded by pump-priming funds from Global Challenges Research Fund at Royal Holloway, and ran from the beginning of March until June 2021. The first goal of this project was to map the kind of socioeconomic themes that emerged during RECOM consultations. The project therefore took a qualitative approach focused on identifying macro-themes that could guide further analysis in the following stages of the project. As the project moves forward, we hope that the preliminary findings will open a research agenda on socioeconomic issues and RECOM. Here are some of the questions raised by this phase of the project.

The first phase of the project allowed us to start mapping socioeconomic issues in a sample of RECOM consultation transcripts. While giving us only a preliminary idea of the frequency and saliency of these themes, this analysis has prompted such a wide range of questions that we hope will not only be explored in future stages of this project, but also inform a research agenda on RECOM and the socioeconomic dimension of transitional justice.

Daniela Lai is a Lecturer in International Relations at London South Bank University. She has published articles in journals including International Relations, Ethnopolitics, and the Review of International Political Economy. Her research focuses on transitional justice and peacebuilding, the politics and political economy of international interventions and post-war transitions. She has a particular interest in the gendered dimension of these processes and feminist approaches to the study of justice, peace and political economy. Her book ”Socioeconomic Justice: International Intervention and Transition in Post-war Bosnia and Herzegovina” was published by Cambridge University Press in 2020.

This article was was originally published on balkandiskurs.com