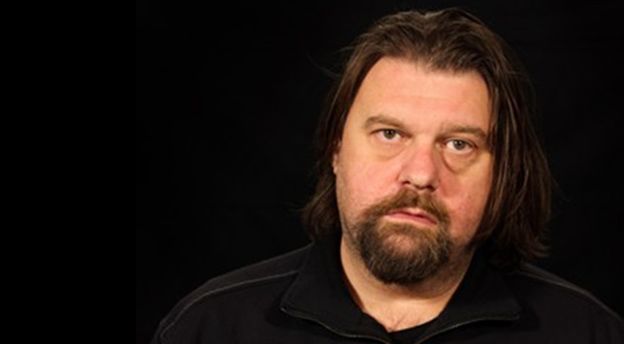 In and by his films, this director fought against the war of which he himself was a prisoner. This is how some of the most significant creations, on life in besieged Sarajevo and the war in Bosnia and Herzegovina, including a documentary, filmed during the war, Children as any other, were created. He has also made two feature films, Fuse and Days and Hours. Pjer Zalica is one of the most famous directors in the region and Dean of the Academy of Performing Arts in Sarajevo.

Even when you are dealing with the most difficult issues, such as war and the break-up of Yugoslavia, it seems that you’re focused on finding the positive and the good in people. How do you make that happen and why is that important to you?

Emotion is a force. Often a terrible, destructive force that can dissolve us. At the same time, sometimes, only emotion can save us, warn us forcefully that something is wrong, or make us feel that something is just right. Emotion often comes before logical or analytical insights, preceding or justifying it. In addition, emotions are what we all have in common, and they are not dependent on cultural, geographical, theological or any other assumptions. Some people are emotionally disabled and can’t feel or sympathize, but that, in itself,belongs to the realm of psychopathy. However we can safely say: we all feel justice or injustice, love or anger, hatred or passion. Therefore, when telling stories of emotion, feeling, is what I center on. I believe that is the central and the strongest point for universal communication. As for the focus for good in difficult circumstances, there is no mystery there: no times or circumstances are so bad as to make one incapable of distinguishing between what is basically good and what is basically evil. If someone claims that to be the case, he is simply looking for an excuse for the bad things he has done. There can be no justification for such things. To understand, to forgive, that’s fine, but to justify—it is not. And as to how it is that I succeed in anything—I really have no idea. I’m trying, I guess.

There is a growing number of films and theater performances dealing with things that ‘official’ history remains silent about. Does the public recognize and respond to artworks and to artists’ messages? Can art change official narratives?

Art has always at least partially dealt with what has been glossed over. I don’t think that is exclusively the prerogative of our times. Art has always focused on the forbidden. Maybe we’ve swept too many things under the rug, concealed too many dark things. Maybe we have been skillfully pretending that they had not happened, or we have called them something else, totally inappropriate names. Maybe now, they are catching up with us, popping up like the devil, like a jack-in-the-box, more than we would usually expect. Some people welcome exposing those dark secrets, othera not at all. Those who encourage such processes are usually in a minority. And they are not just artists. The media, science, history, first-hand witnesses, many of them are doing something courageous and the only right thing – facing the truth. On the other side are all those who want to weaken the process or, if possible, to make it disappear. Among those forces there are many artists. They too make movies, write books, draw, compose, take part in theatrical performances… It is simply a struggle of two concepts: truth and good, versus evil and lies. Sounds a bit like a fairytale. And it is. Because divisions are not so surgically clean. I don’t believe that there are absolutely correct people, immune to mistakes, nor do I believe in completely bad people. I don’t believe that some are as good as angels, and everything they say and do is right, while the latter are purely wrong and evil. I doubt that. But this doubt doesn’t discourage me – on the contrary, I think it’s all the more reason to be constantly trying to do the right thing, with the awareness that we possibly make mistakes. I do not believe that anyone will emerge as a winner from that process.

What was it like to make films during the war in Sarajevo?

It was a horrible experience from which I, unfortunately, profited artistically. Needless to say, I’d give up on that ‘acquisition’ quite happily if only I could bring back even one life lost in vain in that hellish siege. It was abnormal. It is not normal to be held captive, under siege, even though you haven’t done anything. It is not normal to have someone constantly try to kill you by any means possible. It is not quite normal that in such circumstances you still have a need to live, to feel, and to create… We were all like one happy family in hell. Incomprehensible. While filming a documentary about children in the war, I asked a boy who loved to sing to sing, about how it felt for him to be in a war. Improvising, he sang this verse: “It was cheerful, it was horrible.” It was horrible, but we refused to admit it. From time to time I come across a statement that claims the siege of Sarajevo never even happened. That it was made up. I feel sorry for the people who are willing to stoop so low, but I am also terrified knowing how many people are willing to believe these miserable souls. Which brings us back to your previous question.

In your most popular film, which deals with one of the greatest Yugoslav bands, Plavi orkestar, you raise the issues of politics, the system and nationalism. Have you ever felt pressured, by yourself or by others, because of that approach to art?

I’m not an activist to be honest. I see myself as a bass guitarist who directs movies. I do not really choose ‘dangerous’ topics. The media, for example, have often labeled me as someone who deals with irrelevant topics. For years I have been trying to make a comedy, but in vain. I start well, and then, because I deal seriously with my material, I don’t have the nerve to bypass the things I think are important. And so the comedy goes down the drain. But some humor survives, and I’m quite happy that it does. However, after each film there have been some unpleasant reactions. Fuse, for example, was characterized as an anti-Serb, anti-Croat and anti-Bosniak movie. One critic argued that Fuse was anti-Bosniak because in no frame in the film could you see a mosque. I didn’t find that nonsensical attack unusual. What was unusual to me was actually my first reaction – I thought, “Impossible, how could I have made can a film in Teasanj, and not show a mosque…” So, you start following the pattern of idiocy albeit, unconsciously. I try to protect myself from that pattern as much as possible. Although you claim that you don’t feel the pressure, that there is no self-censorship, it is still there somewhere, crouching, waiting, and always ‘doing’ something there. As long as it is unconscious, it’s ok. But when it becomes conscious, then it’s over, you should change your job, go into politics, because there it is an advantage.

What is your opinion of RECOM? From the perspective of an artist, how important is it to determine the names of all the victims?

An artist’s perspective is not specific to this issue, or at least it shouldn’t be. On a human, individual level, there is nothing more important. I personally am not looking for any particular name from the war. I know whom I’ve lost. And I know how much it matters. On the other hand, on a general level it is no less important, because it is simply a question of respect for life. The nations in our regions all pride themselves on how honor is the first and most important thing. So where is the problem then? The problems are numerous, because twenty years after the war, that job is still not done.