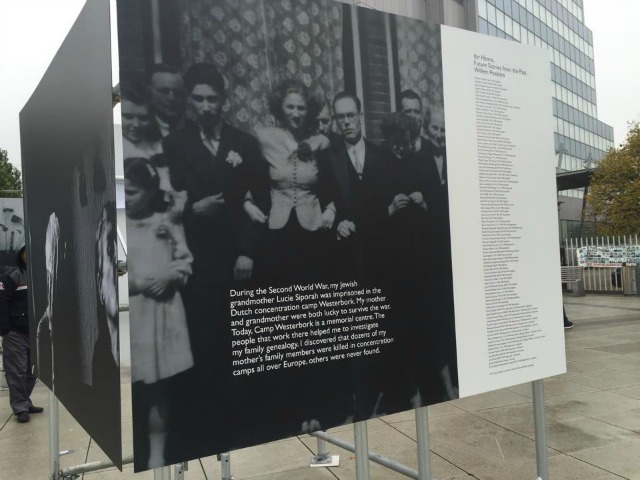 For a new exhibition in Pristina, Dutch photographer Willem Poelstra used his own parents’ story as a starting point to show the long-term impact of the 1990s war on ordinary people in Kosovo.
When Willem Poelstra, the son of a Jewish mother and a Dutch father who worked for a German company during World War II, first visited Kosovo in 2012, his own family’s story was on his mind.

After his parents died, Poelstra found a box of documents and information that revealed how hard it was for his mother Hanna’s Jewish family to accept that she had chosen to marry someone who had worked for the Germans.

This discovery informed the images he shot for his new exhibition ‘For Hanna’, which is on show in Pristina’s Skenderbeu Square until October 17, and features portraits of people from around Kosovo who survived the conflict, seeking to capture images of the country’s everyday post-war reality.

“I feel [the influence of the war] very, very much [in Kosovo], so it’s still there,” Poelstra told BIRN.

He said that his parents would never discuss what happened to them during the war, but argued that this was the only way – in Kosovo as much as the Netherlands after WWII – to face up to the past.

“If you want to make steps forward, you do have to discuss it, you have to talk about it. Even it is not maybe nice to everybody, but I think that’s the way how you come to reconciliation,” he said.

Poelstra said he found it “challenging” to show the images in Pristina, but onlookers seemed to be impressed with the way he documented ordinary people in Kosovo.

Nita Zeqiri, a photographer from Mitrovica, which has remained divided between Kosovo Albanians and Serbs since the war, said that seeing Poelstra’s work was an emotional experience for people who went through the conflict.

“It’s associated with Mitrovica, which continues to have similarities with the origins of the photographer’s parents, as in Mitrovica there are more collaborations and relations between Serbs and Albanians, which is normal, but [collaboration on] political issues is criticised and not seen as human – such relations are perhaps seen as a betrayal of the nation,” Zeqiri told BIRN.

“This is a successful attempt to tell the story of war, of the scars that war leaves, through pictures,” Ahmeti said.

Saranda Bogujevci, an artist who lost all her family in the war and went to live in Britain at the age of 14, said it was important to talk about one’s troubled past in order to heal the psychological wounds.

“It is very difficult to be in the position of the victim, so when one finds an appropriate way to tell the story, it is very important,” Bogujevci said.