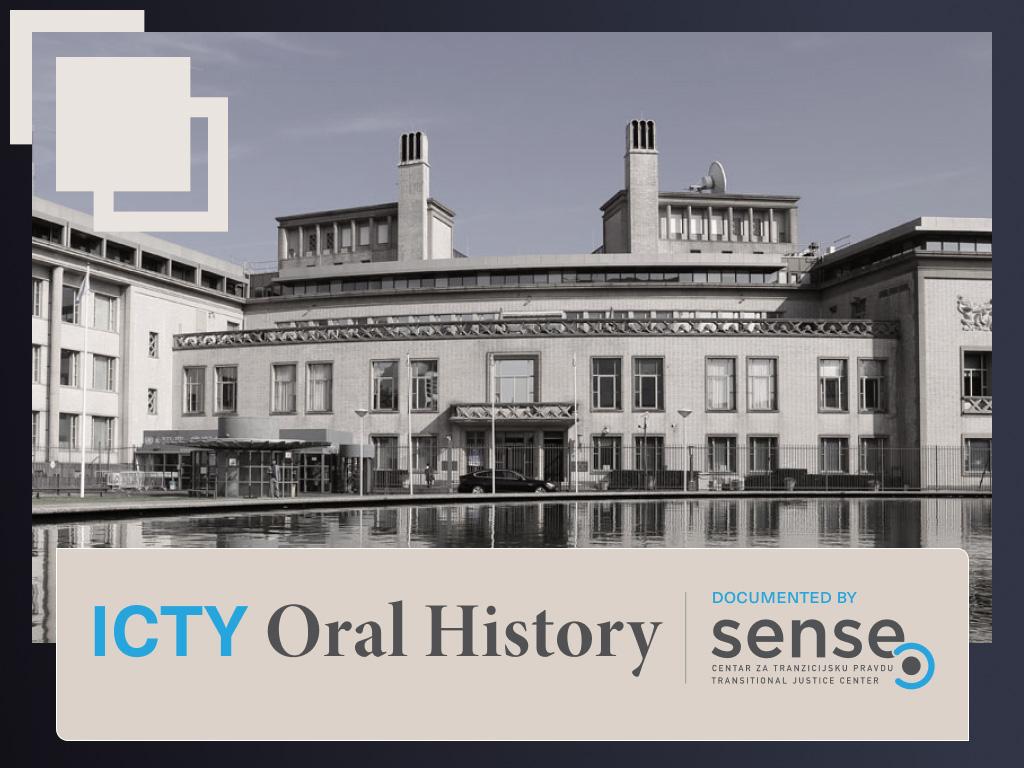 SENSE Agency and its successor, SENSE Transitional Justice Center, reported on the work of the United Nations International Criminal Tribunal for former Yugoslavia (ICTY) from 1998 to 2019. Throughout this period, SENSE has assembled a compilation of over fifty video interviews with the main actors of the ICTY history. Successively publishing these interviews in the following months, SENSE Center embarks on a project to create a unique collection of oral history of the ICTY, as documented by SENSE.

ICTY Oral History Collection of recorded interviews reveals issues, problems, successes, and failures of the ICTY, as they were developing. The Collection aspires to make this historic record of the development of the ICTY and international criminal justice widely and permanently accessible to the public, and increase the understanding of its work.

Among the interviewees are all Presidents and the Chief Prosecutors of the ICTY, judges, leading trial attorneys, Registrars, investigators, defense counsels, the UN Detention Unit wardens and many other figures involved in its activities. With this project SENSE Center is making these interviews available to the public for the first time in their entirety.

We believe that preservation, public accessibility, and unlimited re-use of these backstage records, can play an important role in promoting understanding of the ICTY, its goals and processes, and in opposing the widespread denialist narratives, and conspiracy and revisionist theories about the ICTY and its judgments. Therefore, SENSE Center permits re-use of interviews published as part of this project under Creative Commons CC BY-NC license.

ICTY Oral History Collection is intended for legal scholars, international criminal law professionals and researchers, human rights organizations and activists, historians, investigative journalists, film producers and screenwriters., as well as to general public interested to learn more about this unique attempt to bring some kind of justice to the victims of horrendous war crimes committed during the conflicts in the former Yugoslavia.

SENSE Transitional Justice Center is the successor to SENSE Agency, the only media organization which continuously covered all trials at the ICTY. In 2017 Agency was transformed into Transitional Justice Center with the aim of documenting, preserving, and making visible and permanently accessible the most important facts about events in the former Yugoslavia during the wars of the 1990s, reconstructed and established beyond reasonable doubt at the ICTY war crimes trials.

Images and stories of countless victims, captured by SENSE Agency at the ICTY’s trials are human stories that transcend ethnic barriers and can serve as a basis to educate the public about war and, its effects on individuals and communities in the former Yugoslavia and beyond. The victims, regardless of their ethnicity, were and remain the common denominator in the conflict and it was on the basis of their victimization that the ICTY constructed its foundations. The foundations of SENSE Transitional Justice Center are the SENSE Agency’s past achievements, unequalled expertise, extensive archive of the court proceedings, and unprecedented institutional memory of the work of the ICTY.

Building on these foundations SENSE Centre designs its activities to promote and support the principles of transitional justice, offer historical reflection on the wars, encourage a process of dealing with the past, accountability and individualization of guilt and promote the processes that need to happen in order to reckon with the legacy of war.

The video archive inherited from the news agency provide a springboard not only for SENSE Centre’s innovative audio-visual productions, presentations, and exhibitions, but also for public debates, international and regional conferences, workshop and seminars, aiming at advancing regional cooperation to address the legacy of the wars of the 1990s and to initiate the process of dealing with the past and establishing the factual truth about the conflicts.

SENSE Centre brings together a unique group of experts and expertise. Journalists, judges, prosecutors, lawyers, academics and other interested parties, all with significant experience in the field of international criminal justice, contribute to a multi-dimensional and multi-disciplinary approach to meeting some of the challenges of international justice.