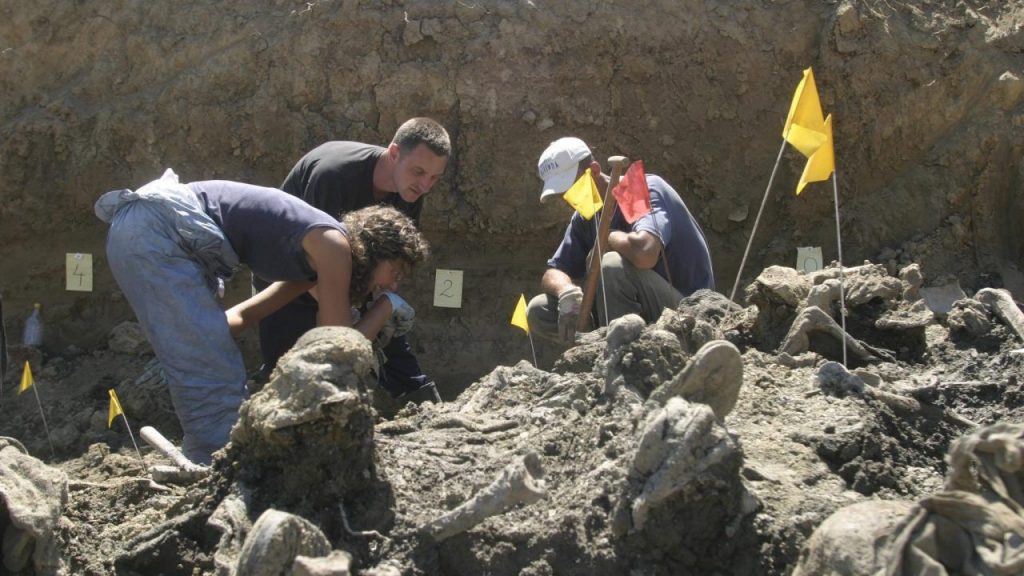 Exhumation of a mass grave in Kevljani near the Bosnian town of Prijedor in August 2004. Photo: EPA/Drago Vejnovic.

Families of 80 people who disappeared in the Brod area during the Bosnian war want more to be done to find their relatives, but officials say they need more information about hidden grave sites.

Marko Grabovac, president of the Association for the Search for Missing Persons in Bosanski Brod Municipality, told BIRN that none of the 80 people who disappeared in the Brod area in northern Bosnia during the war and are still missing have been found in the past two years.

Grabovac, who is also a member of the advisory board of the Bosnian Missing Persons Institute, said that more should be done to find the bodies of those who disappeared, many of whom were elderly when they were seized from their homes during the 1992-95 war.

“Some have been found in mass graves. Very few elderly persons were exchanged [released in prisoner exchanges] or remained alive,” he said.

He noted that the majority of the 88 war victims who were found in the largest mass grave in the Brod area, which was known as Bosanski Brod before the war, were elderly people.

Grabovac is still searching for the body of his mother, who was 82 when she went missing.

“My mother disappeared near her house in the village of Lijesce in May 1992. Several old ladies were captured and taken away in an unknown direction,” he said.

Another resident of Brod, Jelica Kusljic, told BIRN that she has been searching for the remains of her mother, Draginja Sukurma, for the past 29 years.

“My mother was killed by a grenade in her yard in the village of Lijesce on May 10, 1992. She has been missing with no trace ever since. Nobody knows anything,” Kusljic said.

“I was in Serbia with my children [at the time]. We have never found out where she ended up. There is absolutely no trace of her anymore,” she added.

She said she was dissatisfied with official efforts to find the remaining missing persons from the war.

“Nobody tries very hard to find those people. I believed they would have found her remains by now, but it has not happened,” she said.

“So far, 167 people have been identified, while the search for 80 more continues,” Fazlic said.

A major problem for the Missing Persons Institute is that people are not coming forward to reveal where bodies were secretly buried during the war.

“The biggest problem in the search for the missing persons is the lack of reliable information on individual and mass graves and the lack of reliable, truthful witnesses who could help out by revealing the sites where people who were killed were buried,” said Amir Kulaglic, another member of the advisory board of the Missing Persons Institute.

The Missing Persons Institute wants to procure new technical equipment such as drones and ground-penetrating radar to help, but the process has been delayed by the coronavirus pandemic, Kulaglic said.

A total of 7,573 wartime missing persons have yet to be found in the country.