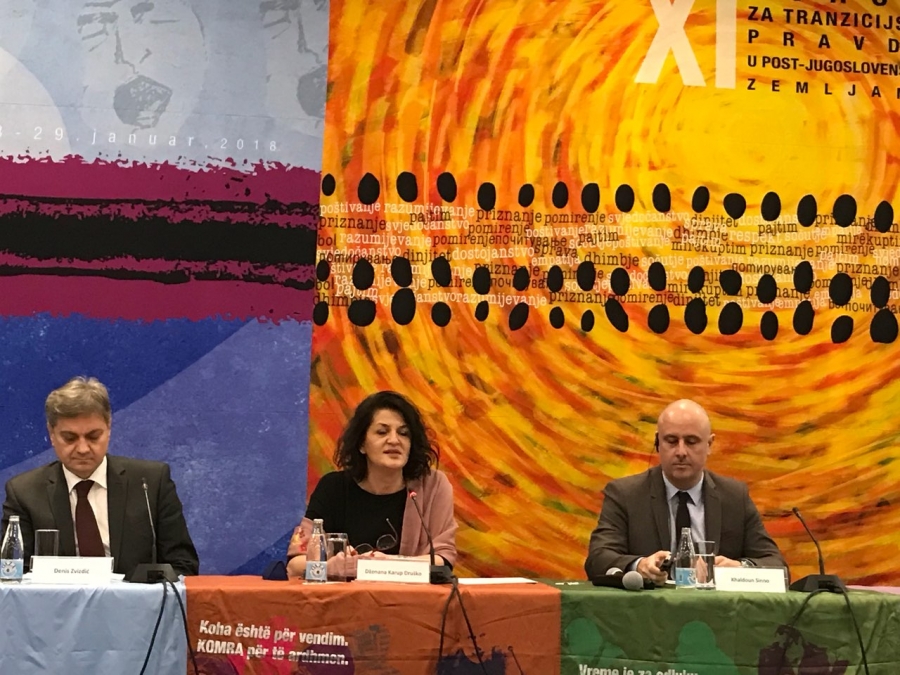 On January 27, 2018, in Sarajevo, the Coalition for RECOM held the VIII Assembly Session, and afterwards, on January 28 and 29, 2018, the Eleventh Forum for Transitional Justice in post-Yugoslav Countries.

The Assembly Delegates welcomed the willingness of most leaders of the post-Yugoslav countries to sign the Agreement on the Establishment of RECOM within the framework of the Berlin Process, at the upcoming London Summit in July 2018, thus activating Article 49 of the Draft Statute of RECOM on undertaking preparations for the establishment of the Commission (RECOM).

The Coalition appeals to the President of Croatia to take into account the facts established by the Hague Tribunal and the courts in Croatia and the region, as well as the results of the careful research conducted by Documenta and the Humanitarian Law Centre. The data show that the identities and circumstances of the deaths of at least 10,000 victims in the war in the territory of Croatia have already been established. There is no reason for war victims in Croatia not to receive regional recognition.

The Coalition for RECOM invites the President of the Republic of Croatia and the President of the Republic of Slovenia, as the heads of EU member states, to join the Presidents of Serbia, Kosovo, Montenegro and Macedonia and the Bosniak Member of the BiH Presidency, and appoint Personal Envoys to write the Agreement on the Establishment of RECOM, to be signed by the Prime Ministers of post-Yugoslav countries at the London Summit within the framework of the Berlin Process in 2018, thus creating the conditions for the RECOM Statute to enter into force within a reasonable time frame.

The Transitional Justice Forum brought together 250 participants – researchers into Transitional Justice and policy and its implementation in practice, human rights NGO activists, members of local and European academic communities, prosecutors and judges, victims and EU representatives.

The panel on the impact of civil initiatives on strengthening Transitional Justice showed that few NGO projects have received political support, and that the example of the Initiative for RECOM demonstrates that it took 10 years to acquire (unsteady) political support, which has only been maintained with difficulty, mostly thanks to the fact that the Coalition for RECOM, besides its political and public advocacy, conducts empirical research, including drafting a list of war victims from the period 1991-2001, as an activity in support of the RECOM mandate. The presentation of the activities of “Women in Black” clearly demonstrated that the persistent marking of the anniversaries of the crimes committed, and participation in commemorations throughout the region, deeply disturb the public and heighten compassion for the victimised “other”, but that political elites in Serbia do not support the humanization of the “other”.

The panel on reconciliation from the standpoint of the academic community painted a grim picture of those academics who, among other things, have the task to teach young people about the past. It was stated that they cannot be counted on, and that those individuals who are active in assuming this responsibility cannot compensate for the fact that “everyone protects their sinecure”; which is why in every country we have only one or two historians who speak out publicly, while everyone else finds an excuse to avoid this responsibility by invoking the scientific need for “historical distance”.

The panel on the legacy of the Tribunal raised questions about the contribution of the Tribunal to education on war crimes and command responsibility, the prosecution of war crimes before local courts, the contribution to democratic processes, the removal from the political scene of some of the military and political leaders responsible for war and war crimes, and building a culture of remembrance of wars and victims. The panellists pointed out very convincingly that, by punishing some of the highest political and military leaders, the Tribunal established the practice of holding those legally in power (de iure) accountable for mass war crimes. But Eric Gordy summed up the public assessments by local leaders and communities of the Tribunal in the following words: “The truth has been hushed up, the institutions are working against us, our group is the largest and most important group of victims, other groups have committed more crimes than is publicly stated, and our group has committed less crimes than the others.” Jasna Dragović-Soso pointed out that there is almost a consensus within the scientific community, “…that, regardless of its other contributions, the Tribunal has not had any visible influence on building public memory of the wars and war crimes.”

The panel on reconciliation from the standpoint of EU enlargement in the Western Balkans provoked the strongest reactions among the Forum participants. Senior EC expert David Hudson explained in simple terms what the new EC strategy brings in terms of reconciliation: “We have managed to keep the agreement within the EU – that we will never kill each other again. The EU helps you build roads, making travel and connecting with others easier. This is one of the models of support for reconciliation. The EU does not regard reconciliation as forgiving what has been done, but rather as an index of political maturity – of the level of political maturity of governments in the region to ensure co-operation, to develop democratic institutions and to be democratic. Reconciliation is an internal challenge, the answer to the legacy. It is up to each nation to determine the approach, and the EU is there to help, provided that the attitude to neighbours is positive, and that governments and politicians, when promising something, keep to their word.ˮ

The panellists Nataša Kandić, Ana Rudan and Eric Cordy emphasized the need for stronger EU support to the Initiative for RECOM, in the sense of a readiness of leaders to contribute to the public construction of memories of a joint past, by listing and commemorating the 130,000 war victims from the period 1991-2001.