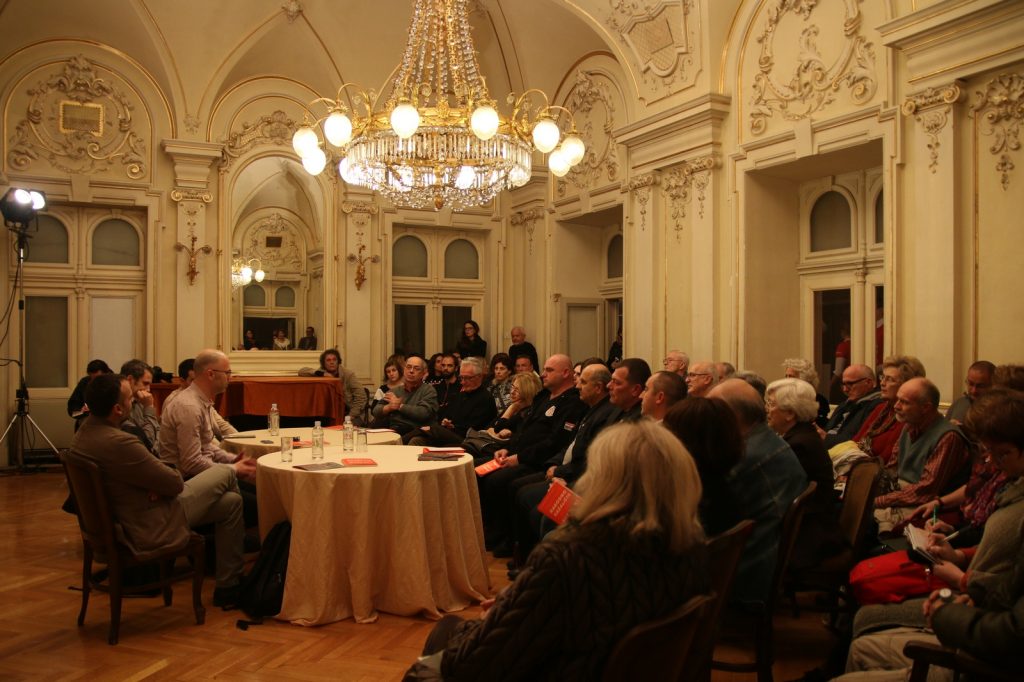 The Croatian National Theatre Ivan pl. Zajc (CNT Ivan pl. Zajc) and the Coalition for RECOM on 19 November 2014 organized a public discussion entitled, “The use of facts in the theatrical portrayal of the reality of the 1990s” as an introduction to the play “The Croatian Theatre”, the final installment of the “Trilogy of Croatian Fascism”, an authorial project by the producer Oliver Frljić and the dramaturgist Marin Blažević.

The speakers included the producer of “The Croatian Theatre”, Oliver Frljić, the theatre producer from Bosnia and Herzegovina, Dino Mustafić, who has directed plays addressing war themes and dealing with the past, particularly the 1990s wars, and the representative of the Coalition for RECOM, Sven Milekić. Mustafić is also a public advocate for the Coalition for RECOM, a broad coalition of associations, organizations and individuals from all seven of the newly-established states in the territory of the former Yugoslavia, who advocate the establishment of a regional commission to determine the facts about the wars fought between 1991 and 2001.One of the commission’s primary tasks will be to compile a name list of all people from the territory of the former Yugoslavia who were killed, imprisoned, expelled or otherwise made to suffer, as well as to open a broad social dialogue on all the crimes and events which shaped our social reality.

Marin Blažević, the dramaturgist at CNT Ivan pl. Zajc, focused the discussion on the theatre as a mirror of social reality, in which role it raises questions about and explores issues not addressed by the academic community, the media or even the civil society.The facts established by the police and the courts, and by non-governmental organizations and commissions, must of necessity be contextualized, in order to demolish state myths and the interpretations of history based thereon.As regards the mass crimes and extirpation of human rights committed during the last wars, the facts must be presented at all levels and through all available channels, in order to ensure for the victims at least some recompense and to expose the perpetrators to society’s censure in cases where court judgement are lacking.

A number of war veterans sat in the first row during the discussion. After the producers explained to them how postdramatic theatre deals with documentary and political facts, they left peacefully without asking any questions.With the assistance of the Sarajevo theatre producer Dino Mustafić and the Coalition for RECOM activist Sven Milekić, Frljić and Blažević explained why it was important for all sides in these parts to deal with their crimes.The audience, which packed the CNT lounge, was informed that Oliver Frljić was engaged on the same project in Slovenia, Bosnia and Herzegovina and Serbia.Sven Milekić explained the ways in which the Coalition promotes the establishment of a region-wide body to prepare a name list of all who were killed, went missing or were incarcerated as a result of the war.

Two days before the panel discussion in Rijeka, the 10th Forum for Transitional Justice was held in Belgrade. At the Forum, the producers Dino Mustafić, Andrej Nosov, Stevan Bodroža, Pjer Žalica and Lazar Stojanović, the dramaturgist Amir Bašović, and the Sarajevo actors Maja Izetbegović and Alban Ukaj spoke about the artist’s need and responsibility to deal with matters neglected or forgotten by official politics and left out of official historiographies.