!The Voice of the Initiative for RECOM is a publication, the main objective of which is to inform the members of the Coalition for RECOM and the supporters of this initiative, as well as the general public, about the RECOM process. The publication deals with the progress of transitional justice in the region of the former Yugoslavia, the experiences of other countries in this area, relevant achievements in the academic community, and the testimony of the victims.

In every issue !The Voice publishes editorials, analyses and interviews with persons who professionally deal with the rights of victims, the need for documenting the facts, the truth, memory and reconciliation.

The bulletin is published monthly, in electronic and printed form, and is distributed in all the countries of the former Yugoslavia. It is published in Bosnian/Croatian/Serbian/Montenegrin, Albanian, English, Macedonian and Slovenian languages.

The International Criminal Court (ICC) has launched an investigation into Russia’s invasion of Ukraine. The investigation has been backed by an... 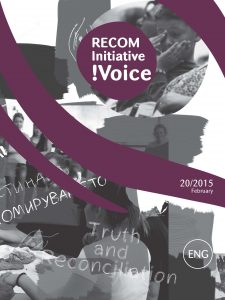 CONTENTS EDITORIAL Zdravko Grebo !We Shall Overcome………………..2 IN THE NEWS !Coalition for RECOM Supports Statute Changes………………..5 !Debate on Dealing With...

This issue is only available in Albanian, Macedonian and BCS languages.