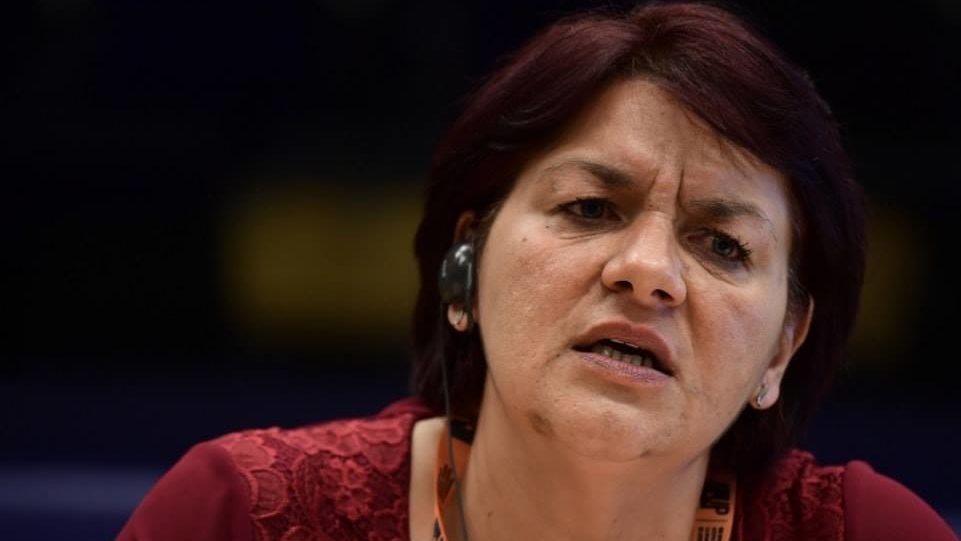 Mirsada Tursunovic, who was raped by a soldier at a detention camp during the Bosnian war, explains how it took 17 years to overcome her fear of being socially ostracised and give evidence against her attacker.

“He pointed his rifle at me and ordered me to strip. I cried and refused to do it.”

Mirsada Tursunovic is recalling June 21, 1992, the day that one of the Bosnian Serb soldiers at the Caparde detention camp near Zvornik in eastern Bosnia ordered her to go upstairs with him.

“He then hit me hard and pushed me onto a couch in that room, took my clothes off and my Turkish trousers, and raped me,” Tursunovic continued.

Tursunovic, who was only 18 at the time, also saw other women being taken away while she was in the detention camp, and assumed that they would also be raped.

According to estimates by the United Nations, between 20,000 and 50,000 people were raped during the Bosnian war.

Wartime rape victims often keep quiet about their experiences for years in order to avoid being stigmatised or condemned by their families and communities. Tursunovic did not tell anyone about what she suffered for 17 years.

“The timing of a victim’s decision to speak out depends on the type and intensity of the trauma, the individual’s personal resources, the context of the traumatic experience and the current context in which the person lives,” a spokesperson for Vive Zene Tuzla, a rehabilitation centre in the north-eastern city of Tuzla that deals with wartime rape victims, told BIRN.

“There is a fear of rejection, and of condemnation by close family members and the local community. A fear of people not trusting them, a fear that their suffering will be downplayed or denied, and a fear of being labelled, stigmatised and ridiculed,” the spokesperson explained.

Research by Medica Zenica, an organisation that offers psycho-social and medical support to female and child victims of wartime and post-war violence, suggests that rape survivors trust such organisations more than state institutions.

“Unfortunately, in family and social settings, people still question whether they are telling the truth about what they experienced and ask how and why they couldn’t avoid it, so victims of violence are forced to prove what they went through with documents and other evidence,” said Lejla Heremic, a family counsellor at Medica Zenica.

Mirsada Tursunovic was among those who eventually sought psychological counselling and professional help. She has had constant support from her husband and daughters from the moment she first spoke out about what happened to her.

“I had nightmares, I often sensed the smell of the man who did that to me. I would wake up suffocating, but I did not dare talk about it to anyone,” she said.

“However, I was aware that I had to seek professional help, because I was subconsciously passing my trauma on to my children.”

With professional assistance, she has now regained her self-confidence and sense of dignity, she said.

‘One cannot just start talking about it’

Experts working for Vive Zene Tuzla also say that some victims also do not want to testify against their attackers in court because they distrust the judicial process and fear that they will not be properly protected against retaliation from the defendants.

So far, a total of 102 cases involving allegations of sexual violence or rape have been heard at the Bosnian state court in Sarajevo.

The court’s witness support section offers psychological, emotional and administrative help to witnesses who are invited to testify.

“Considering the specific nature of war trauma and their delicate mental state, victims and survivors of wartime sexual torture, special attention is given to providing them with psychological support and empowering them before, during and after their testimonies, so as to avoid additional suffering and repercussions for the witnesses’ mental state as a result of their testimonies,” the state court told BIRN.

Mirsada Tursunovic first spoke to State Investigation and Protection Agency officers about the crime committed against her after someone had named her as a witness in a war crime case. The officers’ sensitive approach made it possible for her to give evidence, she explained.

“They approached me in a very nice, professional manner, with concern for my health and mental state. The men would leave the room so I could speak to female officers about my experiences,” she said.

During the investigation, Tursunovic recognised the man who attacked her, but after she had given her statement, he left for Russia and did not come back.

She searched for him on Facebook for years and finally found him last year, but the discovery brought the trauma back again.

“I started shivering, I logged out of my account quickly and later deleted it. I was frightened, I took a sedative, I did my breathing exercises as my doctor had taught me,” she recalled.

She said that she is “living for the day when the criminal will be brought to justice”, but cautioned that pressure should not be put on rape victims to give statements and testify in court.

“It is not easy to admit what happened to you and talk about it. It took me a long time – it took me 17 years to say what had happened to me,” she said.

“One cannot just start talking about it and be questioned right away. [Survivors] should be given space so they can find the right way and moment to speak out.”