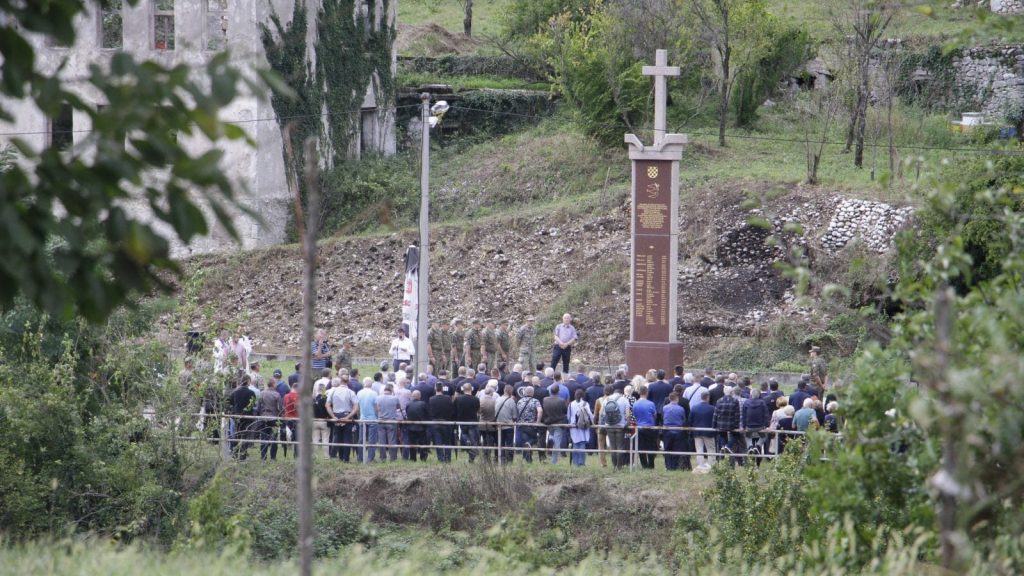 Two soldiers were on opposing sides when 33 Bosnian Croats were massacred by Bosnian Army troops 27 years ago – but now they are both working to ensure that the crime is not forgotten.

On September 9, 1993, Bosnian Army officer Sead ‘Sejo’ Djulic was in Mostar with his superior when he heard what had happened.

“I was at the command headquarters with general Arif Pasalic in Mostar when he was informed over the radio that soldiers from Sarajevo had committed a terrible war crime and some of those soldiers were on their way to Mostar to help us fight the Ustasas ,” Djulic recalled.

“Arif [Pasalic] immediately told a military police commander to wait for them outside Mostar, and when they arrived to let them know they were not welcome in his zone of command. If they refused, the police were to first shoot above their heads as a warning,” he added.

The ‘soldiers from Sarajevo’ were also Bosnian Army troops. They were arriving from Grabovica, a village near the town of Jablanica, where they had committed a brutal massacre of 33 Croat civilians, most of them older people, but one of them a four-year-old child.

The soldiers did not reach Mostar as they intended. “After shots were fired, they returned to Jablanica,” Djulic explained. “The details of the Grabovica massacre were hidden and we got to know them a long time after it happened.”

The soldiers, around 700 of them from the Bosnian Army’s 9th Brigade, 10th Brigade and 2nd Independent Battalion, had been sent from Sarajevo to bolster the Neretva ’93 offensive against the Croatian Defence Council, HVO, the Bosnian Croat wartime military force.

The subsequent trial of Bosnian Army general Sefer Halilovic at the International Criminal Tribunal for the Former Yugoslavia failed to convict him of having command responsibility for the massacre because prosecutors did not prove beyond reasonable doubt that he had effective control over the troops who carried out the killings in Grabovica in September 1993.

Sead Djulic said that the Grabovica massacre still haunts him – particularly because it was committed by troops from his own army. “Someone came from somewhere else, committed the crime and left a bloody stain on all of us,” he said.

Some 25 years after the killings, Djulic was the manager of MTM (Mostar Youth Theatre) when it staged a surprise hit play that everyone in town was talking about.

Directed by Djulic, the play was about the Grabovica massacre and was named after the four-year-old girl who was killed.

‘Uspavanka za Mladenku’ (‘A Lullaby for Mladenka’) was a small, amateurish production with a cast of teenagers who were born long after 1993 when the massacre took place, but it became more popular than all the other premieres that season.

The teenage actors who appeared in ‘A Lullaby for Mladenka’ had not heard of the massacre when Djulić suggested they could do a play about it.

“One of them even asked where it was, even though it’s very close to Mostar. At that time none of them knew what happened there,” he said.

Back in 1993, few people initially knew much about what had happened. Grabovica was completely sealed off after the massacre; entering the area was forbidden even to international press and peacekeeping forces.

But even though the Hague Tribunal failed to convict Sefer Halilovic, many new facts and details emerged during the trial.

Some lower-ranking soldiers were convicted by the Bosnian state court. One of them, Enes Sakrak, a member of the Bosnian Army’s 9th Brigade, was convicted of the murders of members of Zadro family, including four-year-old Mladenka, and sentenced to ten years in prison because he showed remorse and decided to cooperate.

Sakrak testified that on the morning of September 9 in Grabovica, the troop commander Nihad Vlahovljak ordered to his unit to “murder all the locals”. Vlahovljak never said where he got the order from, according to Sakrak, but he testified that he thought it came from someone higher up in the ranks.

Another soldier, Mustafa Hota, was convicted of murdering the Maric family. He got the same sentence as Sakrak – ten years in prison. Soldiers Nihad Vlahovljak, Sead Karagic and Haris Rajkic were also convicted and got 13 years in prison each.

These five individual sentences are all the justice that the families of the Grabovica victims have got. It was never proved who gave the order to murder the civilians, most of them women and old people.

Josip Drežnjak is the president of the victims’ families association. At the time of the Grabovica murders, he was a Croatian Defence Council soldier in Mostar. He said that each year that passes, the expectations of the families get lower and lower. All they want now is to find the remains of their loved ones so they can have a proper burial.

“It hurts most knowing that people were convicted of those crimes and we haven’t has any new information on the bodies since 1994. Eleven people were identified then, after that we haven’t found one new bone, unfortunately,” said Dreznjak.

“Mladenka and her mother for example, their bodies were never found and the murderer confessed. He’s already walking around a free man because he got a ridiculous ten-year sentence,” he added.

His other goal is to present to the courts all the new evidence he comes across against the people he believes are responsible for the Grabovica massacre. He claims that a lot of important files and documents were not available to the prosecutor in the Halilovic case.

“I came to deliver the new evidence in person to the prosecutor’s office at the court of Bosnia and Herzegovina. I came across two authentic orders from 1993 that imply Sefer Halilovic was in full command of the Neretva ’93 operation,” he said.

BIRN contacted Halilovic’s son, who now acts as his spokesperson, but he declined to comment for this article.

One important piece of evidence that Dreznjak presented to the prosecutors was a documentary series produced by the Alliance for Protecting the Heritage of the War in Bosnia and Herzegovina, the Association of Bosnian Army Generals and the Alliance for Protecting the Name and Acts of the Territorial Defence of Bosnia and Herzegovina. The five-part series, available on YouTube, presents new evidence, never shown before, says Halilovic was the leader of the Neretva ’93 operation. The authors of the series, all former Bosnian Army soldiers, do not deny that the operation took place.

Another piece of evidence cited by Dreznjak is a verdict handed down by the Bosnian state court, acquitting him of defamation.

Halilović filed a defamation lawsuit against Dreznjak for claiming that the general was in command of Neretva ’93 during the massacre in Grabovic.

Halilovic insisted that the Hague Tribunal had already proved his innocence. But Dreznjak presented documents entitled ‘Neretva ’93 Directive’ which had Halilovic’s signature as proof.

The Neretva ’93 directive commands the Bosnian Army’s 3rd, 4th and 6th Corps to conduct offensive military operations in the zone where the Grabovica war crimes happened. The court accepted the documents as legitimate and Dreznjak won the legal battle.

But even though he offered new evidence to the prosecutor’s office, Dreznjak never received any feedback. The prosecution did not respond to BIRN’s request for a comment.

Sefer Halilovic published a book in 1997 entitled ‘Lukava Strategija’ (‘A Cunning Strategy’), in which he implied that some Bosnian Army soldiers, some of whom were above him in the chain of command, were actually responsible for commanding not only the Grabovica massacre, but also another massacre of Croats that was committed just afterwards in the village of Uzdol.

The contents of his book and his son Semir’s documentary film ‘Kako je izdana Hercegovina’ (‘How Herzegovina was Betrayed’) made his fellow soldiers extremely angry.

Meanwhile the production of ‘Lullaby for Mladenka’ in Mostar brought the story of the massacre back into the public consciousness and reminded society that a heinous war crime was committed not far from where they live, and that the mastermind was never punished.

“Twenty-five years after the war, this is the first play that talks explicitly about the war crime and I think that is unacceptable. We, as a society are still in the phase where we believe that our guys are the good guys and the others did all the crimes,” said Djulic.

“That is why we sat down, we did our own artistic investigation and agreed that we will do the play for ourselves. If we sweep our front porch, maybe others will feel obliged to do the same. Only that way can our communal yard become clean, and I believe that’s the point of dealing with the past,” he added.

The emotional high point for Djulic and his young cast, who came from various different ethnic and religious backgrounds, was the night that they performed the play for the families of the victims.

Dreznjak was in the audience: “I was watching it and feeling shivers down my spine. It was extremely painful and emotional. Unfortunately, everything shown in the play was true,” said.

Dreznjak and Djulic were on opposite sides during the war in the 1990s but today they are friends. Djulic brings veterans from all the warring factions to Grabovica each year to pay their respects to the victims and offer condolences to their families.

“It was very weird, 30 of us, all ex-soldiers who fought each other because we were pushed into a war we did not ask for,” he said of one such visit. “We came together to lay a wreath to the victims of our armies. We even attended mass.” he said.

The mystery of the 33rd victim

Most of the victims of Grabovica get remembered at least once a year, at the annual commemoration of the murders, but one of them, the 33rd victim, is almost forgotten.

His name was Ivica Cavlovic and he was killed by his own comrades. Finding facts about the man who, according to some accounts, tried to stop the massacre, only to get killed as well, proved difficult.

Some sources call him Karlovic instead of Cavlovic, and none of the Cavlovic family members are still in Sarajevo, where he was from.

Cavlovic, who was born in 1961, was a Croat from Sarajevo who joined the Bosnian Army to defend his hometown and the land in which he was born. Some sources, such as a Hague Tribunal witness called Ramiz ‘Celo’ Delalic, say he was in the Bosnian Army’s Zulfikar Squad. Others, like author Ivica Mlivoncic in his book ‘Zlocini s pecatom’ (‘Crimes with an Official Stamp’) claim he was part of 109th Mountain Brigade, who were known as the Igmanski Vukovi (Wolves of Igman).

In the book, Mlivoncic quotes a couple of Igmanski Vukovi members and their testimonies reveal the brutality of what happened on that night in Grabovica. Slaughter, rape, beheadings, people being nailed to a cross. Autopsy results from 1994 confirm these claims.

Cavlovic heard gunshots in the village and tried to find out what was going on. According to Delalic, he was part of the Zulfikar Squad and an anonymous soldier cut his throat on a bridge for belonging to the wrong ethnic group.

Mlivoncic claims that Cavlovic was shot dead because he could have gone on to testify about what really happened in the village.

Cavlovic’s name will never be written on the large stone memorial with the names of other victims in the centre part of the village.

The Croat political elites in Bosnia and Herzegovina led by the Croatian Democratic Union, HDZ party are unlikely to allow this, because for them, he was a member of the ‘wrong army’.

The circumstances in which he was killed will also never be cleared up, which means that his murderer is unlikely to ever see justice done.

Nikola Bacic is a journalist and TV reporter for Radio and Television of Bosnia and Herzegovina. This article was produced as part of BIRN’s Balkan Transitional Justice grant scheme, supported by the European Commission.

The text Bosnia and Herzegovina’s Grabovica Massacre: The Soldiers Who Couldn’t Forget  was originally published on Balkan Insight/Balkan Transitional Justice.