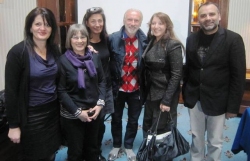 The Letter of Support to the Initiative for RECOM, sent on October 7, 2011, and addressed to the presidents and members of the presidency of the countries of the former Yugoslavia, was signed by 155 regionally renowned intellectuals and artists.

We, for whom the war in the former Yugoslavia, with all its consequences, has become the subject of professional research and artistic vision, an occasion for reflection and concern about the fate of memory and truth, ask you to do everything in your power to enable the Initiative for RECOM to come to life and to begin its operation, wrote the artists and intellectuals in their letter.

“This is a broad initiative of the citizens who want to institutionalize the truth through the system,” said Dino Mustafic, and added: “We all know to what extent the victims are being manipulated and we know very well that this can only lead to new clashes.”

Ursa Raukar supports the establishment of RECOM because the commission has the potential to prevent manipulation: “Without truth, peaceful life for our children will not be possible… Horrible crimes were committed, but another major crime is the manipulation of victims.”

Mirjana Karanovic fears the return of the rhetoric from the 1990s to the Serbian political scene: “I am still angry with the way the national television of Serbia manipulated the dead.”

Musician Dino Merlin supports the Initiative for RECOM, and believes that the commission could stop the relativization of crimes: “He who denies Srebrenica, is doing the same with regard to Jasenovac.”

Slovenian director Dusan Jovanovic believes that the Initiative is well planned, and hopes the appeal for its establishment will bear fruit. From politicians he expects much more than a principled support.

The Letter of Support to the Initiative for RECOM