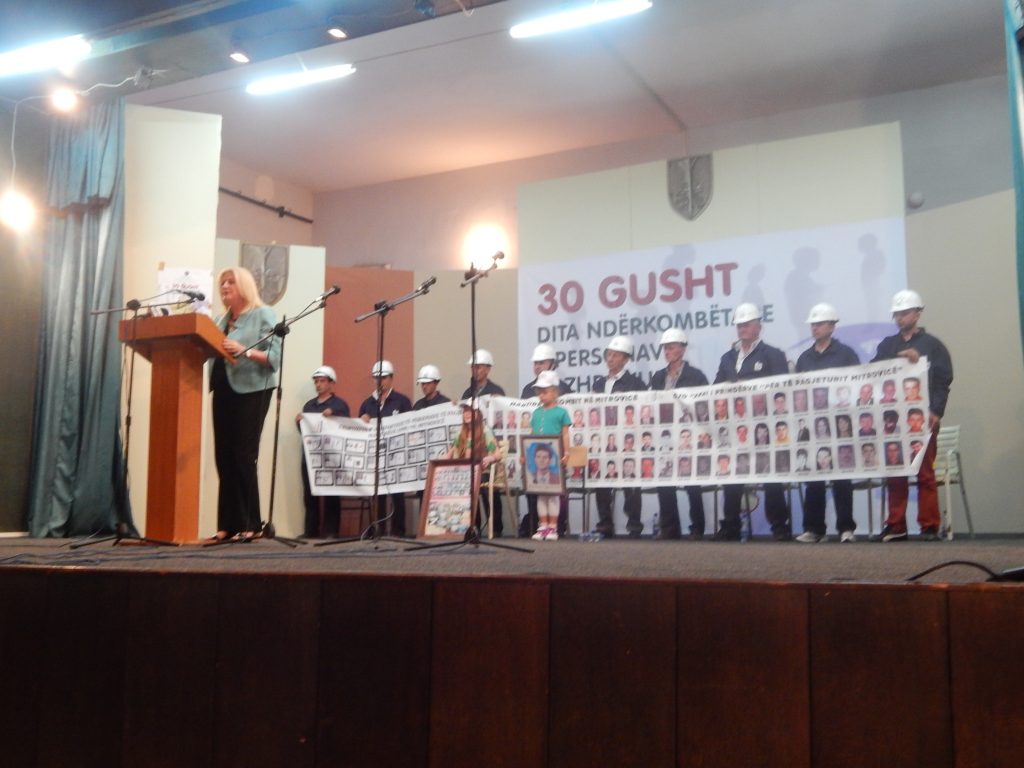 Under the patronage of the Prime Minister of Republic of Kosovo, Hashim Thaci, “International Day of Missing Persons” is marked. On the occasion of marking this day, the Government Commission on Missing Persons, in cooperation with the Municipality of Drenas and family associations of missing persons, organized the Central Summit, held in Drenas, in honour and memory of all missing persons whose fate and location is not yet known, and their families that continue to live in anticipation for the fate of their loved ones.

The participants in the ceremony, family members, representatives of local and international institutions, associations emerged from war, on behalf of the Government of the Republic of Kosovo, were addressed by the Deputy Prime Minister of Republic of Kosovo Edita Tahiri, who, in her speech said:

“I am here with you, once again, with much pain and anguish to mark the International Day of Missing Persons. This wound, which continues to weigh on our minds and our souls, as one of the deepest sorrows, the deepest wounds as result of the Serbian genocide against the Albanian people in Kosovo, during the last war”

This manifestation that is being held today in Drenas has a particular symbolism because the missing persons who were identified in mass grave in Rudnice of Raska, Serbia are mainly from Drenas and Skenderaj. The mass grave discovered in Rudnica fifteen years after the war proved a double genocide because not only Serbia killed Albanians but also tried to lose track by erecting a building on this mass grave. However, we will commit that the truth of the Serbian genocide in Kosovo be fully elucidated, and as leadership, we ensure you that this tragic history will never be repeated.

“Allow me to say that this day is marked all over the world today, because the tragedies of people have not stopped. And we join the sorrow to all those families in all those places where genocides and tragedies have occurred, and that this issue is not solved even for them “- said Mrs. Tahiri.

On this occasion, Deputy Prime Minister of the Republic of Kosovo, Edita Tahiri pointed out the dedication and commitment of the Government and other national and international stakeholders, to elucidate the fate of the missing persons, and added:

“As the Government of the Republic of Kosovo, I want to ensure our full commitment that we will not stop until the full elucidation of this tragedy. And each missing persons and all family members who are waiting to elucidate the fate of the missing persons for many years, will finally have the information. And on this occasion I would like to appreciate the great work that is being done by the Government Commission on Missing Persons, the Associations of families of the missing persons, the International Red Cross, other international partners, in this case the European Union, United States, the EULEX, which these days took a special mission, receiving mortal remains, part of mortal remains of Rudnica Raska, Serbia, as well as many other activities within the dialogue that is taking place between our Government Commission and the Government Commission of the neighbour state, who was the aggressor and occupier in our country.

Deputy Prime Minister, once again emphasized the request for Serbian authority, to open the archives and be more cooperative in resolving the fate of missing persons. “I would like once again to invite Serbia to open archives, especially the archives of the former Yugoslav Army, because there is full information. They did these crimes, they did this genocide, and they know where the bodies of the missing are, or may be in other places where research should be done.”

In the concluding part of this commemorative speech, Deputy Prime Minister of the Republic of Kosovo, added:

“Kosovo, as a new state, has managed to work and be independent. But, we are a state and a nation that will never forget contributions of those all Albanians, not only in the decade of the nineties, of the war for independence, but over a hundred years we fought for freedom and independence. And now that we gained freedom, it is our duty and obligation to always respect, with piety and to remember all those who contributed for this that we have today. ”

In this commemoration, with a speech, the audience was also addressed Prenkë Gjetaj, Chairman of the Government Commission on Missing Persons, and Nexhat Demaku, Drenas Mayor. On behalf of families of missing persons and family associations concluding speech was given by family member Bajram Qerkinaj.