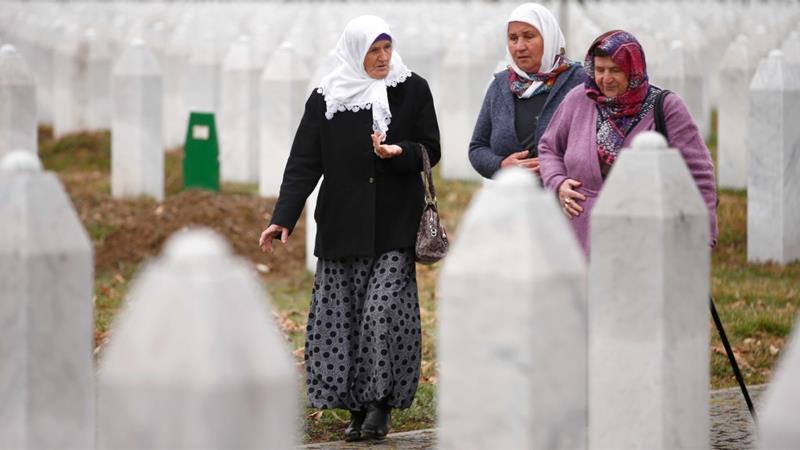 As survivors of the Bosnia massacres are leaving this world, the threat of history repeating itself is bigger than ever.

Two months ago, my mother was diagnosed with terminal cancer. As we wait for the inevitable, I can’t help but reflect on what is going to be lost with her passing. Almost a quarter of a century ago, my family survived the Srebrenica massacre. Once my mother dies, her experience of persevering in the face of persecution, violence, poverty and hunger is going to die with her.

Ours is not a typical story of surviving Srebrenica. When the Serb forces came to Bratunac, the small town we lived in on the Bosnia-Serbia border, in May 1992, my immediate family managed to escape the onslaught and took refuge in Srebrenica. Some of my relatives, however, were not that lucky: a number of them were killed at the outset of genocide, most of them in a mass execution on a meadow just outside Nova Kasaba, a place I drive by every time I go home.

My father was killed by a shell fired by Serb forces in December 1992 near our home, outside Bratunac. A few months later, my mother and my sister were deported – or “evacuated” as the UN preferred to say – as UN trucks were used to relieve Srebrenica of its “excess” population to Tuzla, another enclave controlled by the Bosnian government.

I don’t know much about the life my mother and sister had as refugees in Tuzla, as I remained behind in Srebrenica with my maternal grandparents. I know that they spent some time in a refugee camp on the outskirts of the town, living in a classroom with about two dozen other people.

My mother worked as a hired hand, mainly in the fields, in exchange for food. I know there were times she had to beg for food to feed herself and my sister. But that is it. Like many other things, what happened in Tuzla was not spoken of after the suffering was over.

My mother never looked back on that period of her life. She always tried to encourage us to move on and look forward. When the time comes for my mother to make her final transition from this world, I’ll know everything about how she died and next to nothing about how she lived.

As I was reflecting on my mother’s life, Ahmo Hasic, one of three survivors of the July 1995 Branjevo mass execution, died of natural causes. Hasic’s story is widely known because he testified against those responsible for the genocidal massacre of more than 8,000 Bosniak men and boys who were captured after Srebrenica fell to Bosnian Serb forces on July 11, 1995.

But what is known of him and his life is limited to what had probative value in the process of establishing individual criminal responsibility. We know how he managed to avoid a brutal death, but don’t really know anything about how he lived.

The carnage in the 1990s wiped out an entire generation of Bosniaks and now, we are quietly losing the few survivors. The brave men and women, eyewitnesses to an attempt to destroy a nation, are dying in silence and anonymity.

With their passing, we are also losing their stories, experiences and wisdom. This is a major loss not only for us Bosniaks, but also for humanity as a whole.

As the dark clouds of ethnic and religious tensions gather yet again across the world, the experiences of these Bosniaks not only about surviving a genocide but also living through the post-war era and dealing with all the disappointments surrounding the promises of transitional justice are more relevant and significant than ever before.

The remaining survivors, scattered around the world as many did not want to go back to the land where so much was taken from them, still have so much to teach us. Their experiences should inform decisions we make in the future.

Despite what some in the policy and media circles in the West try to argue, what happened to us Bosniaks a quarter-century ago was not a footnote, a mere anomaly, in European history. Just like the mass murder of European Jewry in the 1940s, the mass-murder of Bosniaks in the 1990s was a direct consequence of the faulty and highly dangerous way “Europeans” define their identity.

Muslims – together with Jews – have been playing the role of Europe’s “other” for centuries. The myth that has been built on the perception of Muslims as the inferior, aggressive and at times dangerous “other” was undoubtedly one of the core reasons for Bosniaks’ suffering.

Today, the same dangerous myth is being used by the far right across Europe and beyond to blame Muslims for the world’s many deep-rooted problems. Srebrenica survivors, like my mother, are perhaps the ones best placed to tell the world what this type of hate and dehumanisation can lead to.

Next year will mark the 25th anniversary of the butchery of Srebrenica. To say that what happened in Srebrenica in July 1995 was the first such crime on European soil after World War II is to completely disregard the horror of the concentration camps discovered in 1992 or the rape camps for which there is no precedent in European history. Genocide in Bosnia and Herzegovina was a long process of systematic extermination.

Today, what happened in the 1990s in Bosnia serves as an inspiration to far-right terrorists across the world as well as their “anti-imperialist” allies. Today, we can no longer claim that another genocide is impossible.

In the face of this threat, it is up to our generation to prevent one from taking place again and to ensure that the lives and sacrifices of my mother, Ahmo Husic, and other Bosniak survivors have not been in vain.

The article was originally published on: https://www.aljazeera.com