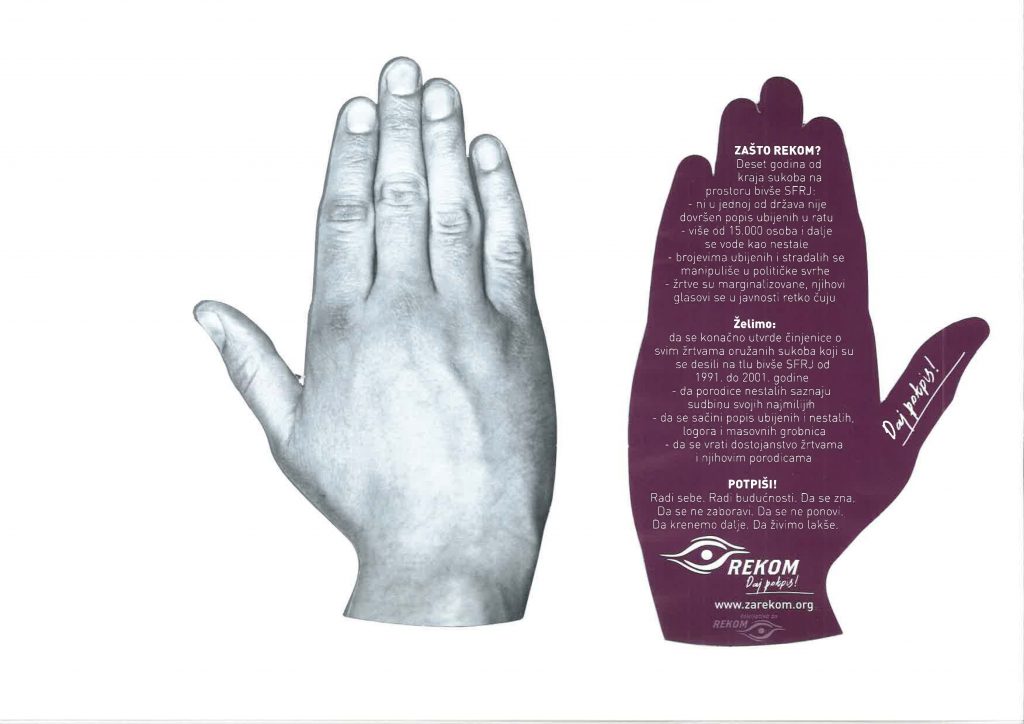 The media campaign of securing citizens’ signatures in support of the establishment of the regional commission, RECOM – Sign for It! – commenced on April 26 and closed on June 30, 2011. The activities were taking place simultaneously in Podgorica (Regional Defrosting), in Belgrade and Zagreb (street actions Hands Full of the Past), in Sarajevo, Banja Luka, Pristina, Ljubljana and Skopje. The signatures were collected in other cities throughout the former Yugoslavia.

The campaigns were coordinated by the Youth Initiative for Human Rights in Croatia and Serbia. In each of the regional states, the campaign was coordinated by local organizations, mainly those that bring together young activists: in Kosovo, the youth group Integra; in Macedonia the Youth Educational Forum – MOF; in Slovenia the Institute Academy of Advanced Ideas; in Bosnia and Herzegovina PRONI and the Youth Resource Centre; and in Montenegro the Monitoring Center – CEMI.

Activists across the region carried out the campaign for more than two months. During the campaign they explained to the citizens the reasons for RECOM, and urged them to give their support signatures. At the same time, the media extensively reported on actions and events within the campaign, including meetings of representatives of the Coalition for RECOM with governments’ representatives of all countries, and support signatures by a number of celebrities from all walks of public life.

TV clips RECOM – Sign for It! (directed by Slobodan Šijan)