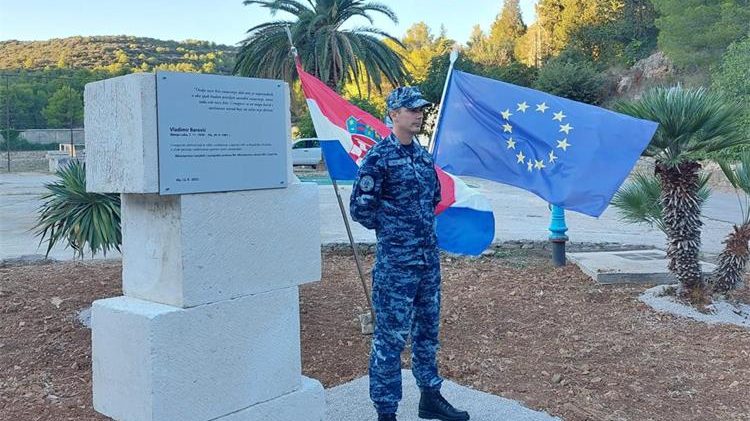 Montenegrin and Croatian officials on Monday unveiled a memorial on the Croatian island of Vis to a Yugoslav naval officer who refused to bomb towns on Croatia’s coast in the war in 1991.

A memorial plaque to Yugoslav People’s Army JNA naval officer Vladimir Barovic was unveiled on Monday on the island of Vis in Croatia.

During the ceremony, Montenegrin and Croatian government representatives hailed Barovic’s act as part of the universal story of honour and humanity.

“Barovic’s sense of honour did not allow him to bomb the coastal towns in Dalmatia when ordered to do so. As he said, ‘Montenegrins cannot fight and destroy a nation that did not do anything wrong,’” Montenegro’s Minister of Defence, Rasko Konjevic, said.

As a commander of the Pula military-maritime sector in Croatia, Barovic took part in negotiations about the withdrawal of the JNA from that city in 1991.

Media reported that, during those negotiations, Barovic said that Croatian towns would not be attacked while he was in command.

After he was ordered to shell coastal towns in northern Croatia from his ships, Barovic resigned and then committed suicide.

According to media reports, in his suicide note, he wrote that he had “decided to die with dignity because Montenegrins cannot fight and destroy a nation that did not do anything wrong”.

As part of Yugoslavia, Montenegro took part directly in the wars in Croatia and Bosnia and Herzegovina under the leadership of Serbia’s Slobodan Milosevic, although it saw no conflict on its own soil.

From December 1991, the JNA, including a large number of Montenegrin soldiers and reservists, besieged the Croatian city of Dubrovnik and nearby Konavle region for nine months.

In 2000, Milo Djukanovic, then prime minister of Montenegro, formally apologised to Croatia for the suffering and losses that Montenegrin soldiers had inflicted, particularly in the Dubrovnik area.

Since it became independent in 2006, Montenegro has held just eight trials for war crimes committed in Croatia, Bosnia and Herzegovina and Kosovo, but only low-level perpetrators have been prosecuted.

This article was was originally published on balkaninsight.com