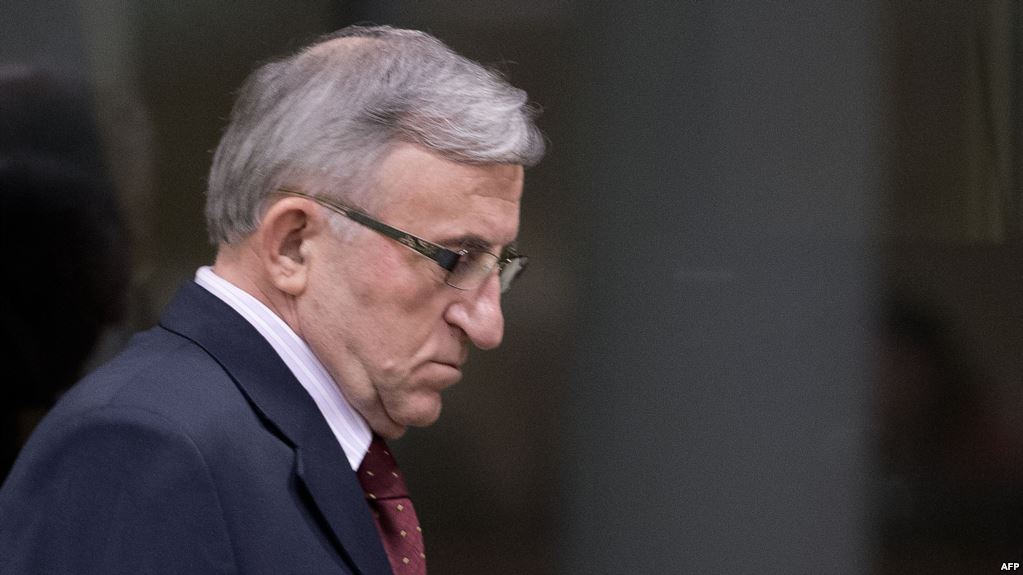 LJUBLJANA/BELGRADE (Reuters) – In 2009, Serbian general Vladimir Lazarevic was convicted by a U.N. court of war crimes over the forced deportation of more than 700,000 ethnic Albanians during the 1989-99 Kosovo war.

The squat, bespectacled Lazarevic was one of the chief executors of a systematic effort to empty the then-Serbian province of ethnic Albanian civilians and raze their homes in the last bloody chapter in the collapse of Yugoslavia.

This week, two years after he was released from jail, the 68-year-old found a new job – lecturer to the next generation of Serbian soldiers at the country’s Military Academy.

Where a war crimes conviction might count as a minus in most countries, in Serbia it has become a badge of honor.

“The role models for the cadets should be Serbian generals, in particular those who have proven themselves in the toughest of times,” Defence Minister Aleksandar Vulin told the Vecernje Novosti newspaper on Wednesday, confirming the appointment.

The move has alarmed human rights activists in the Balkan country. But Lazarevic is not alone.

He is one of a trio of convicted Serbian war criminals who have risen to political prominence since serving out their sentences, testing trust in the country’s claim to have left behind its dark past and embraced Western democracy.

Civil society activists and Western diplomats are warning of the damage to Serbia’s image abroad and to the slow process of reconciliation in the region – a key condition of integration with the European Union. Accession talks with the EU opened at the end of 2015 and are not expected to end before 2022.

“The message is very dangerous; it’s playing with fire,” said Natasha Kandic, a prominent human rights lawyer in Serbia who has spent years documenting war crimes in Kosovo and elsewhere in the former Yugoslavia.

“This is not even historical revisionism, it’s the introduction of crime as a recommended act,” Kandic told Reuters. “It’s the end of any vision of European integration, good neighborly relations, regional cooperation – none of that makes any sense after this.”

A spokeswoman for the EU’s foreign policy arm did not respond to a request for comment. Reuters could not obtain a phone number for Lazarevic, who rarely appears in the media. A spokeswoman said Vulin was not immediately available to comment.

“BRAVEST OF THE BRAVE”

Convicted war criminal Nikola Sainovic, a close ally of late Serbian strongman Slobodan Milosevic during the Kosovo war, was appointed to the governing board of Serbia’s co-ruling Socialist Party within a week of being released in 2015.

Former army officer Veselin Sljivancanin, convicted in The Hague over the killing of more than 200 Croat prisoners of war at a pig farm in the Croatian town of Vukovar in 1991, is now a regular feature at events of the ruling Progressive Party of conservative President Aleksandar Vucic.

While there is no law barring them from political roles, their prominence and the enthusiasm with which they have been embraced sit uneasily with the image Vucic has projected of a reformed former ultranationalist determined to take Serbia into the European mainstream.

Vucic, Serbia’s information minister during the Kosovo war, wowed European capitals this year with his choice of a lesbian technocrat as prime minister. The appointment of Vulin, a hardliner and former ally of Milosevic’s exiled widow, as defense minister in June was seen as a nod to nationalists and Serbian ally Russia, however.

Last week, Vulin told a gathering of army veterans that Serbia need no longer feel ashamed but “quietly proud” of officers such as Lazarevic, “the bravest of the brave.”

Afterward, Washington’s ambassador to Belgrade, Kyle Scott, took to Twitter. “Unfortunately, months of work on improving Serbia’s image in the US can be undermined with just one statement,” he wrote on Oct 11.

Kosovo, which declared independence with Western backing in 2008 but is not recognized by Serbia, said the appointment demonstrated that “Serbia has never changed.”

“We are deeply disturbed by the systematic glorification of war criminals in Serbia, and their rehabilitation in senior political, security, and education institutions,” Kosovo’s deputy prime minister, Enver Hoxhaj, told Reuters.

Kosovo’s prime minister, Ramush Haradinaj, is himself a veteran of the war, a former guerrilla fighter against Serbian forces who was twice tried and twice acquitted of war crimes by the U.N. court in The Hague.

But convicted war criminals have made it into public office in other parts of the former Yugoslavia: the mayor of the northern Bosnian town of Velika Kladusa, Fikret Abdic, is a notorious former warlord, while Johan Tarculovski, the only Macedonian to be convicted of war crimes in The Hague, is now a member of parliament.

The gradual “normalization” of relations between Serbia and Kosovo is central to Serbia’s EU accession hopes, but the process has dragged on for years.

Hoxhaj lamented what he called “the silence of the international community on Serbia’s derailing from the alleged commitment to European values, democracy, rule of law and international justice.”