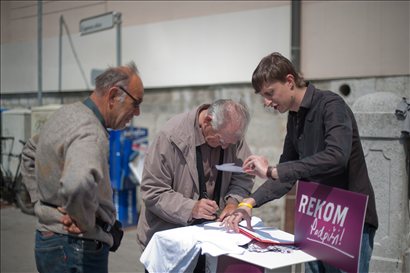 Member of the European ParliamentTanja Fajonstated that it is very important to respect such a civic initiative, especially because it gathers the states of the Western Balkans. “I believe it is very important that these countries are able to overcome divisions from the past on their path to the EU, to find common truth, to reveal crimes and human rights violations because that will make life in the region easier in the future”

Member of the Parliament fromLDS, Anton Andrelič, stated that RECOM can help clarifythe circumstances, which ledto the conflict, and redress injustice. Member of the Parliament fromSDS,Eva Irgl , stated that it would be good to include murders committed after the war in the investigation of war crimes considering the fact that after the war that ended in 1945 there were cases of unlawful murders.