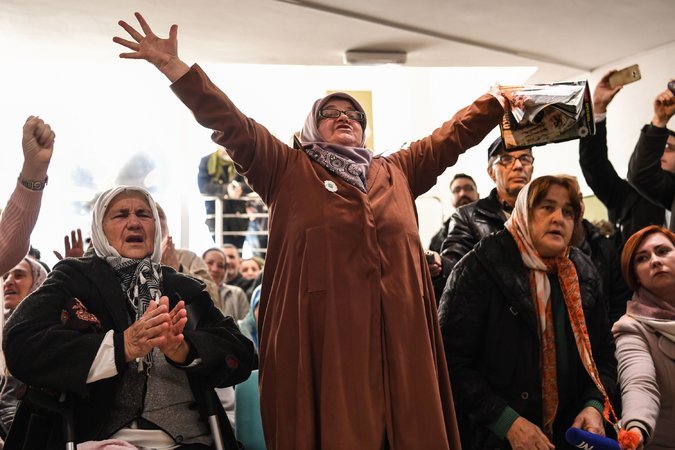 THE HAGUE — It was the closing of one of Europe’s most shameful chapters of atrocity and bloodletting since World War II.

With applause inside and outside the courtroom at the International Criminal Tribunal for the Former Yugoslavia, Gen. Ratko Mladic, the former Bosnian Serb commander, was convicted on Wednesday of genocide, crimes against humanity and war crimes. He was sentenced to life in prison.

It was the last major item of business for the tribunal in The Hague before it wound down, a full quarter-century after many of the crimes on its docket were committed.

From 1992 to 1995, the tribunal found, Mr. Mladic, 75, was the chief military organizer of the campaign to drive Muslims, Croats and other non-Serbs off their lands to cleave a new homogeneous statelet for Bosnian Serbs.

The deadliest year of the campaign was 1992, when 45,000 people died, often in their homes, on the streets or in a string of concentration camps. Others perished in the siege of Sarajevo, the Bosnian capital, where snipers and shelling terrorized residents for more than three years, and in the mass executions of 8,000 Muslim men and boys after Mr. Mladic’s forces overran the United Nations-protected enclave of Srebrenica.

Sitting impassively at first in the court in a blue suit and tie, Mr. Mladic seemed much smaller than the burly commander in fatigues who had often appeared before the news media during the war to defend himself and his forces. 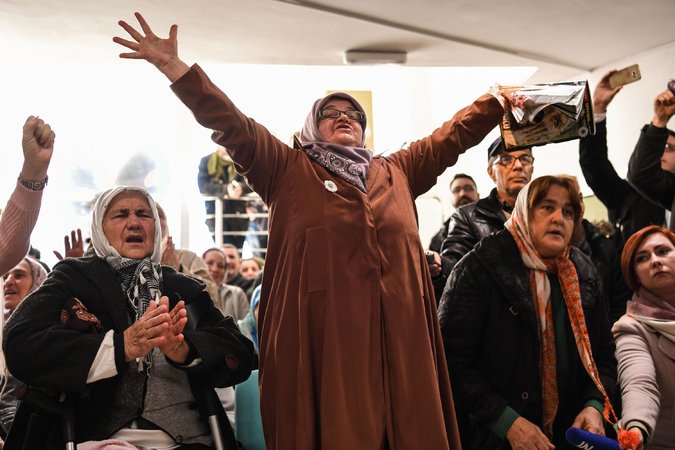 Many in Srebrenica, Bosnia and Herzegovina, watching a live broadcast of the trial cheered when the verdict was announced on Wednesday. CreditDimitar Dilkoff/Agence France-Presse

At one point, Mr. Mladic disappeared from the court, apparently to receive treatment for a dangerous surge in blood pressure. Upon returning, he began shouting at the court in a dispute over his blood pressure.

“Everything you are saying is a pure lie!” he yelled at the bench. The judges then ordered him removed.

In pronouncing the life sentence, the presiding judge, Alphons Orie, said that Mr. Mladic’s crimes “rank among the most heinous known to humankind.” Mr. Mladic’s lawyers said they would appeal.

But if Mr. Mladic’s punishment drew a line of sorts — juridically at least — it was a halting and ambivalent marker between Europe’s epochs of uncertainty.

Far from the quieted theaters of Balkan conflict, nationalist passions, the clamor for redrawn frontiers and collisions of faith are rising anew, not to the crump of mortar fire and the stutter of machine guns, but in the recharting of the political landscape.

In October, Austria became the latest European nation to veer to the right, following Hungary and Poland. In Germany, the far-right Alternative for Germany secured enough votes in national elections in September to enter Parliament for the first time. In many lands there is a sense of flux, from the secessionist yearnings of Catalonia in Spain to Britain’s planned departure from the European Union.

Some of those passions are drawn from the angry response among Germans and other Europeans to Chancellor Angela Merkel’s readiness to open Germany’s frontiers to hundreds of thousands of Muslim refugees from Syria and elsewhere — many of whom passed through Serbia on their way north. 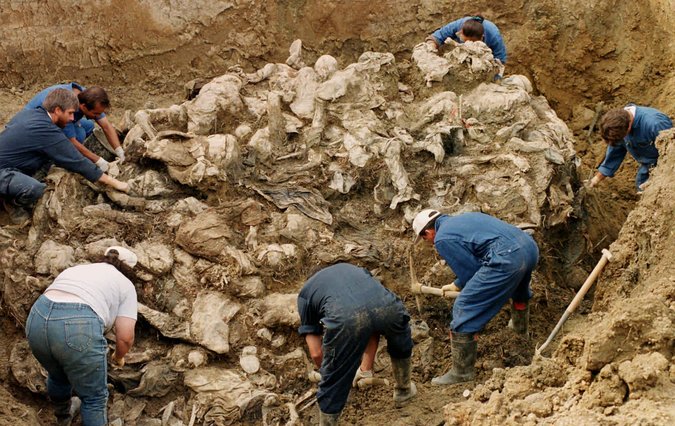 International War Crimes Tribunal investigators in 1996 at the site of a mass grave for victims of the Srebrenica massacre near the village of Pilica, Bosnia and Herzegovina. CreditStaton R. Winter/Associated Press

In Britain, many who voted in June 2016 to leave the European Union did so, they said, out of resentment of outsiders’ influence over their destinies and the presence of what they saw as unchecked European immigrants.

In Serbia, calls are intensifying for a return to the nationalist politics of the 1990s. Once-discredited senior officials from the barbarous government of Slobodan Milosevic in Belgrade — and not a few convicted war criminals — are reclaiming positions of prominence.

There is a sense, too, of unfinished business and resentments that the war did not heal. Indeed, the trials of Mr. Mladic and others — including his political boss, Radovan Karadzic, who was jailed for 40 years on almost identical charges last year, and Mr. Milosevic, who died in 2006 before the end of his trial — may simply have intensified Serbia’s rancorous perceptions of being treated unfairly and Muslims’ sense of loss.

“Regardless of the verdict that we all feel as part of the campaign against Serbs, Ratko Mladic remains a legend of the Serb nation,” said Milorad Dodik, the president of the Serb autonomous region in Bosnia and Herzegovina, which was carved out and cleansed of non-Serbs by Mr. Mladic’s wartime forces.

Sead Numanovic, a Bosnian journalist in Sarajevo who fought against Mr. Mladic’s forces, said, “This verdict, like all the others, will not bring back sons to their mothers, dead brothers to their sisters and husbands to their wives.”

The sense of victimhood among Serbs seemed to have been trumped on Wednesday by the sentencing of Mr. Mladic, which all but confirmed Bosnian Muslim resentments that the Serbs had succeeded in advancing their territorial ambitions by genocide.

“This should all have been behind us by now,” said Hasan Nuhanovic, a Bosnian survivor of the Srebrenica massacre. “The only thing that is behind us is that war.” 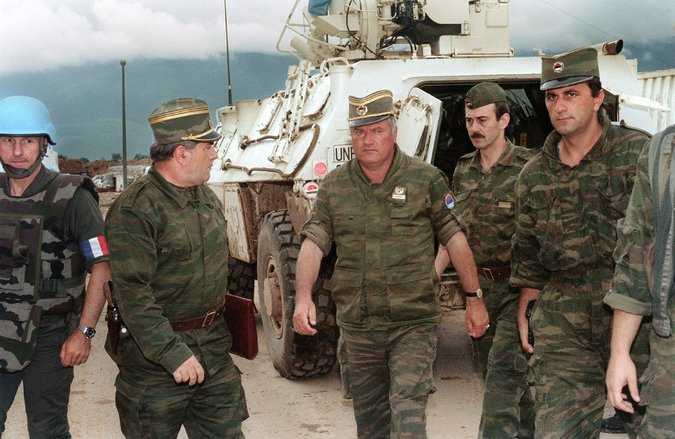 On both sides of the enduring ethnic divide, there was a feeling that the pronouncements of robed judges at The Hague will have no perceptible impact on the practicalities of eking out an existence in straitened times.

Bosnians in Sarajevo who once ran from snipers’ bullets and sheltered from incessant indiscriminate shelling by Mr. Mladic’s artillery units in the hills above the city have traded those perils for a dysfunctional government, joblessness and a collapsed social security and health system. (In The Hague on Wednesday, Judge Orie said Mr. Mladic had personally directed some of that deadly fire.)

In Belgrade, the crumbling socialist-era grandeur harks back to better times, when the city was the capital of a moderately developed Yugoslavia with a population of 22 million, rather than the impoverished republic it is today, among Europe’s poorest.

Coupled with that struggle is a lingering memory not just of the war in Bosnia and Croatia of the early 1990s but also of the fighting later in the decade in what was then the southern Serbian province of Kosovo. To this day, banners in front of the Parliament building hold Bill and Hillary Clinton responsible for the widely resented 78-day NATO campaign that drove Serb-dominated forces out of Kosovo, enabling it to eventually declare independence in 2008.

Against that dim backdrop, Serbia is hoping to become the next member state of the European Union, although that would be in 2025 at the earliest.

Commenting on the outcome of the trial in The Hague, Natasa Kandic, a leading Serbian human rights activist, said that with the atrocities in the Bosnian war, “we stopped being part of the civilized world.”

“Now we can see who stopped our progress and why we became a society without solidarity or compassion,” Ms. Kandic said. 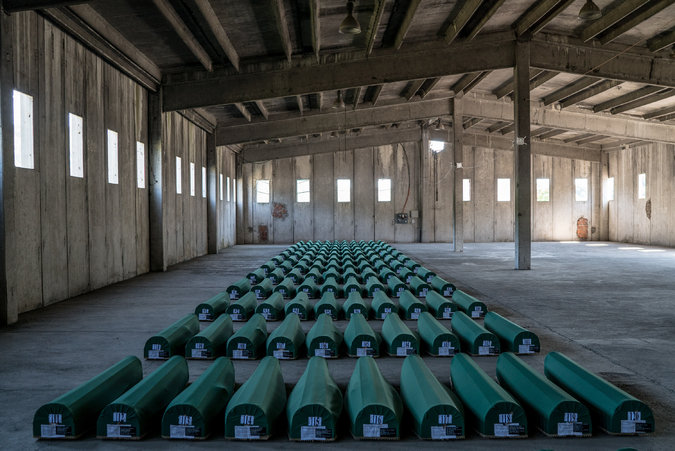 The coffins of 127 Srebrenica victims identified via DNA testing before burial at Potocari, in 2016.CreditAndrew Testa for The New York Times

For advocates of human rights, the judgment — the culmination of a trial that began in 2012 only to be interrupted by Mr. Mladic’s health problems — was historic.

The United Nations human rights chief, Zeid Ra’ad al-Hussein, called it as “a momentous victory for justice” and declared that “Mladic is the epitome of evil.”

Mr. Mladic had left a compelling trail, recording his meetings and telephone conversations with military officials, politicians or foreign envoys. They were discovered behind a false wall in Mr. Mladic’s home; included in that cache were 18 notebooks of his wartime diaries, an extraordinary windfall, prosecutors said.

It was also the first trial in which prosecutors presented evidence from recently explored mass graves around an open-pit mine at Tomasica, near Prijedor in northern Bosnia, where Muslims were herded into concentration camps, tortured, raped and killed during the ethnic cleansing campaign.

The International Commission on Missing Persons, which uses DNA testing, said this month that so far 656 bodies from the mine have been identified, among the nearly 6,000 people reported missing around Prijedor in the summer of 1992.

More bodies are emerging, including remains that were moved to other graves to hide the magnitude of the crime.

Mr. Mladic’s diary notes a request in 1992 from Simo Drljaca, the Prijedor police chief, asking for the army’s help to remove about 5,000 bodies buried in Tomasica by “burning them or grinding them or in any other way.”

Mr. Mladic wrote that he replied: “You killed them, you bury them.”