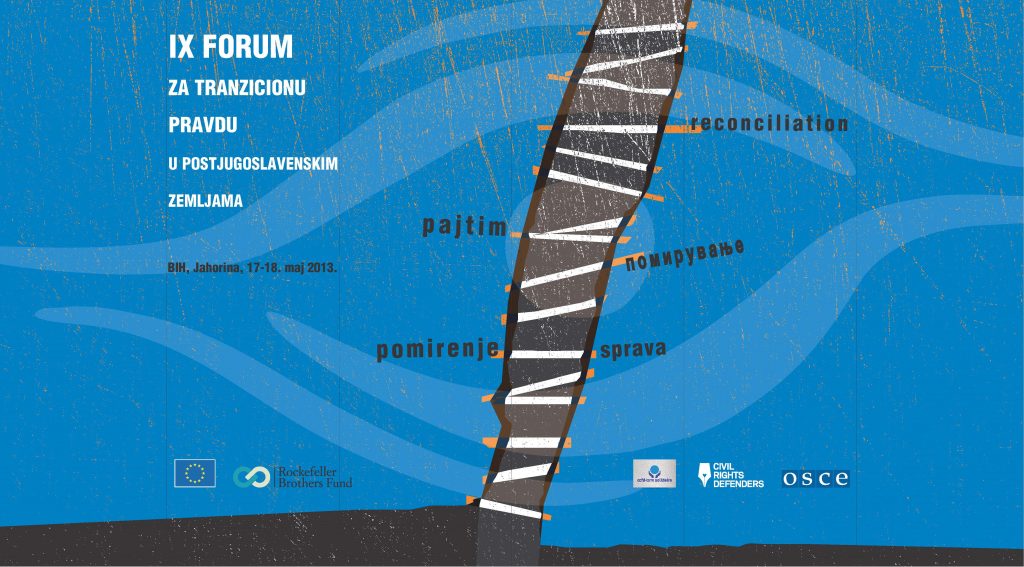 The IX International Forum for Transitional Justice, entitled ‘Reconciliation in Post-Yugoslav Countries’, was held on Mount Jahorina in BH on 17-18 May 2013. The Forum was attended by 220 activists of civil society organizations, including associations of victims, families of missing persons and veterans, artists, members of the academic community and representatives of state institutions of BH and from the region, international institutions and religious communities.

The Forum was opened by Dino Mustafić, public advocate of the RECOM Initiative, and then welcomed and addressed by Željko Komšić, Member of the BH Presidency.

The Forum discussed the results achieved in establishing transitional justice in post-Yugoslav countries, the experience of Northern Ireland, reconciliation from the point of view of states, religious communities, the scientific community, the community of artists and culturologists and civil society organizations, as well as the legacy of the Hague Tribunal in the service of reconciliation.

The Forum featured prominently in the BH media as well as in the region. The Forum was reported in the portals of B92 and E novine in Serbia, the daily Novi list in Croatia, Mladina and Večer in Slovenia and a great many web portals in BH – radiosarajevo.ba, sutra.ba, source.ba, citaj.ba, frontal.ba, the Fena news agency, the Federal television channel, the weekly Dani, the dailies Oslobođenje and Nezavisne, and the regional web portal of the Balkan Investigative Reporting Network (BIRN), the portal of Deutsche Welle, the TV 1 Channel of Montenegro and other media outlets.

The Sixth Assembly of the Coalition for RECOM