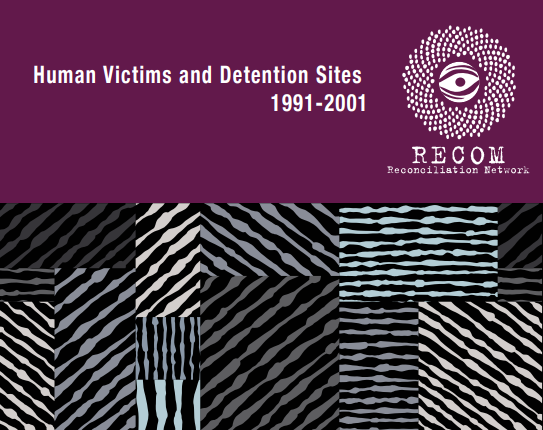 The RECOM Reconciliation Network is continuing the process of documenting the human losses and detention sites, believing that some new leaders will understand that it is an obligation of the states, the successors of the former Yugoslavia, to jointly list the 130.000 victims in the 1991–2001 wars: those who lost their lives, as well as missing persons.

Starting in December 2019, the RECOM Reconciliation Network (formerly the Coalition for RECOM) resumed documenting war victims in a political climate where it no longer has the support of leaders and institutions for the establishment of an interstate commission for creating a list of victims and war crimes (RECOM). In the past year, our focus has been on the documentation of human victims in the war in Croatia, of abductions and disappearances in Kosovo, and of detention facilities in BH, which are listed in various sources, but have not been encompassed in the trials before the ICTY and national courts; as well as on the creation of a record of the detention facilities whose existence has been established in court judgements.

In the past year, Documenta has conducted its research in Osijek-Baranja County, where around 2.100 persons died. It has gathered relevant information about the circumstances
of the deaths or disappearances of 1.391 victims, by taking statements from family members and eyewitnesses, and statements based on second-hand knowledge.

In 2020, the Humanitarian Law Centre (HLC) and Humanitarian Law Centre Kosovo (HLCK) decided to restrict the scope of their research into the human victims in Kosovo to persons who disappeared between 1998 and 2000, for three reasons: to use data on each individual missing person in order to demystify the political story about missing persons as being solely about the number of ethnic victims; to arouse public solidarity and compassion with the families of all the missing persons, both in Serbia and in Kosovo; and additionally to apply pressure on institutions to disclose the locations of mass graves and information related to the relocation of bodies. The results of the research show unambiguously that the basic reason why the number of missing persons has not decreased in recent years– especially in cases of group disappearances – is political in nature: currently in power in Serbia are political parties (the SNS and SPS) that are concealing information about mass graves, and thereby protecting from criminal liability VJ and MUP generals – members of the SNS and SPS, or with close ties to those parties – in whose zones of responsibility mass crimes were committed during the NATO bombing; whilst in Kosovo, Hashim Thaçi, who was indicted for war crimes by the Prosecution of the Kosovo Specialist Chambers in November 2020, has until recently been president.

Research on Human Victims and Detention Sites, 1991-2001 can be downloaded HERE.