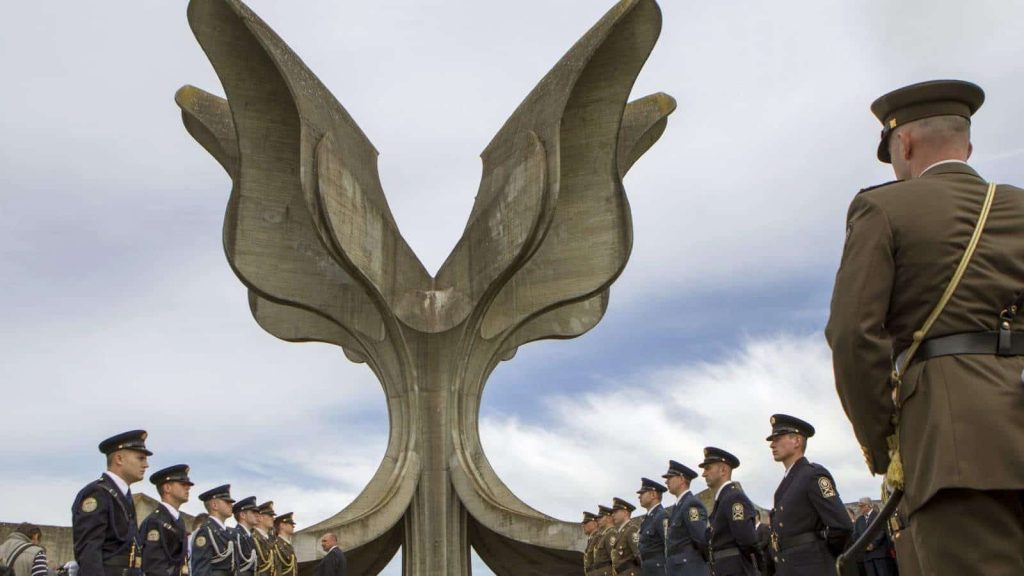 Many East European countries are wary of beginning an honest conversation about the crimes committed on their territory during World War II, and instead have appropriated the memorialisation of the Holocaust to denigrate communism.

Within a few short months in the spring of 1942, half of all Serbian Jews – mostly women, children and the elderly, since almost all able-bodied Jewish men had already been shot in 1941 – were killed in a mobile gas van, disguised as a truck, at the Nazi death camp Semlin at Sajmiste, the Belgrade Fairgrounds, just across the Sava river from the city centre.

In June 1942, Emanuel Schäfer, the head of the German Security Police in Serbia, reported back to his supervisors that “Serbien ist Judenfrei” (“Serbia is free of Jews”). Belgrade was thus the first European city, and Serbia only the second Nazi-occupied territory (after Estonia), to carry this macabre designation. The only Jews who remained alive were either in hiding, often in the countryside, or had joined the Partisan resistance.

The Semlin camp is also a site of considerable importance for the larger historiography of the Holocaust, as it marks the period of particular intensification in the killing of European Jews. The systematic use of the mobile gas van points to the refinement and routinisation of the Nazi killing techniques, soon to be expanded in the death camps across occupied Eastern Europe. It is also the central site in the topography of the Holocaust in Serbia.

And yet, today, the Semlin camp site is a grotesque site of non-memory. The remaining buildings of the camp complex have been taken over by overgrown foliage, dumped trash, stray animals and wasps’ nests.

The buildings are crumbling, some have turned into small businesses – there is a car mechanic shop, a bodega, a storage facility of some kind, an abandoned, overgrown and depressing-looking children’s playground, and an office of the ruling political party. The shiny new Usce shopping centre glitters through the treetops. The story of the Semlin camp, as well as that of the larger Holocaust in Serbia, remains almost entirely outside of Serbian public memory.

And yet, Holocaust imagery is everywhere. In 2014, the Historical Museum of Serbia put on a highly-publicised exhibition entitled ‘In the Name of the People – Political Repression in Serbia 1944-1953’, which promised to display new historical documents and evidence of communist crimes, ranging from assassinations, kidnappings and detentions in camps to collectivisation, political trials and repression.

What the exhibition actually showed, however, were random and completely decontextualised photographs of “victims of communism”, which included innocent people but also many proven fascist collaborators, members of the quisling government, right-wing militias, and the Axis-allied Chetnik movement.

But the most stunning visual artefact was a well-known photograph of prisoners from the Buchenwald concentration camp, including Elie Wiesel, taken by US soldier Harry Miller at the camp’s liberation in April 1945. In the Belgrade exhibition, this canonic image was displayed in the section devoted to a communist-era camp for political prisoners on the Adriatic island of Goli Otok. The exhibition described the display as “the example of living conditions of Goli Otok prisoners”.

Even after this misrepresentation was exposed, the Buchenwald photograph remained on display when I visited the exhibition in May 2014. Sometime thereafter, in response to an outcry from Holocaust historians, a small note was taped underneath the display caption that read: “Prisoners’ bunk-beds in the Dachau camp.”

That nobody bothered to check that the photograph of the prisoners’ bunks was, in fact, from Buchenwald and not Dachau, is symptomatic of the broad indifference with which the Holocaust is met in Serbia.

In Croatia, the country that has an incredibly problematic relationship with its WWII past and an unresolved legacy of the homegrown Ustasa fascist regime, it is Jasenovac, the concentration and death camp where 85,000 Serbs, Jews, and Roma were killed in unspeakably gruesome ways, that continues to be the most significant and contested site of Holocaust remembrance.

A new narrative has emerged in Croatia in the past few years that claims that the story of Jasenovac was ‘overblown’ and that its high death toll was fabricated by Yugoslav communist and later Serbian nationalist propaganda.

This narrative has then further morphed into the claim that Jasenovac was in fact not a fascist camp at all, but it was run by communists as a place of ‘mass execution of Croatian patriots’ after the end of WWII. This narrative is promoted by a number of revisionist historians, including a brand-new research ‘institute’ which purpose is to determine the truth about this ‘communist’ camp.

This revisionism has become so mainstream and state sponsored that in 2018 Croatian president Kolinda Grabar Kitarovic called for the creation of an international commission to determine the truth about the camp between 1941 and 1945, “but also after” – indicating that the narrative that Jasenovac was a communist camp after the war was now accepted at the pinnacle of power.

Similarly, in the attempt to erase fascist crimes and use their imagery to represent real or imagined crimes of communism, at the site of the Stara Gradiska camp (part of the Jasenovac complex of camps), the Croatian government mounted a memorial plaque in 2011, memorialising “political prisoners, victims of the communist regime, who perished in the Stara Gradiska prison”.

The use of the word prison and not camp is important because it directs remembrance to the pre-war and post-war period, when the site was used as a regular criminal prison, and not to the WWII-era Ustasa death camp, where more than 12,000 Serbs, Jews, Roma, and other enemies of the Independent State of Croatia, including a very high number of women and children, were killed.

Another memorial plaque installed in 2007 memorialises the Croatian inmates of a Serb-run camp on the same site during the 1991-1995 Croatian war. The third, installed in 1996, remembers “Croatian patriots” who were imprisoned in the camp in “the king’s and communist Yugoslavia”.

Not a single official sign indicates that it was the major concentration camp during WWII, where my own father was interned as a child.

This appropriation of Holocaust sites, remembrance and imagery to delegitimise communism is hardly an indigenous post-Yugoslav invention.

This ‘blackwashing of history’ has occurred throughout Eastern Europe and has become a form of ‘screen memory’ that filters out and obfuscates any serious addressing of one’s own responsibility for mass atrocity in more recent wars, but also clouds the memories that don’t fit the current political moment, such as those of extensive Nazi crimes against communists and partisans.

This type of Holocaust remembrance, as I suggest in my new book, ‘Yellow Star, Red Star: Holocaust Remembrance after Communism’, is best understood as memory appropriation, where the memory of the Holocaust is used to memorialise a different kind of suffering, such as suffering under communism, or suffering from ethnic violence perpetrated by other groups.

Across the region, governments have used public monuments, museums, and memorials to nationally appropriate the memory of the Holocaust, and use it to produce a new visual remembrance of their 20th Century past that supports their myths of nationhood.

Deep, honest and comprehensive discussion and remembrance of the Holocaust is often resisted across post-communist Europe because elevating Jewish victimhood above victimhood of other regional majority ethnic groups is increasingly openly resented.

In the absence of almost any Jews across vast swaths of the East, post-communist national identities were built first on a rejection of communist pan-national identity (where the organising narrative was loyalty to socialism and not to ethnicity), and instead on an ethnic majoritarian and therefore very homogeneous basis, leaving almost no room for the incorporation of minority narratives.

But the focus on Jewish suffering is also rejected because it brings about discussion about extensive and deep local complicity in the Holocaust and the material and political benefits of the complete Jewish absence. Jewish businesses, homes and property have over decades of looting followed by communist seizures slowly been absorbed into the general economy, with difficult and sporadic attempts at restitution.

This is why the memory of the Holocaust continues to be unsettled, contested and instrumentalised, more than 75 years after the big, dark, grey truck at the Belgrade Fairgrounds shut its doors for the last time.