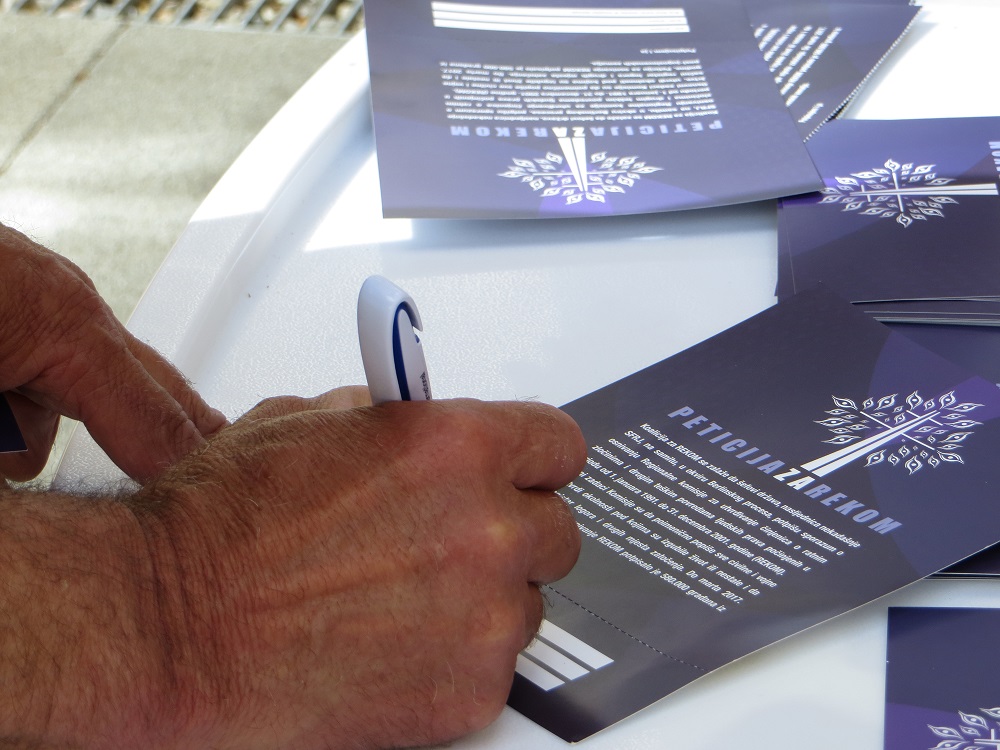 In May 2017, in the course of just a few days, 50,000 citizens of Sarajevo, Banja Luka, Pristina, Zagreb, Belgrade, Nis, Presevo, Novi Sad, Zrenjanin, Subotica and Novi Pazar signed the petition calling on the leaders of post-Yugoslav states to conclude an official agreement to establish RECOM as part of the Berlin Process.  The aim of the campaign* was to inform the public about the obligations of states and political leaders in the region undertaken in the official declarations signed at the Summit of Western Balkan Leaders in Berlin (2014), Vienna (2015) and Paris (2015), calling for “concrete steps to be taken by Western Balkan leaders towards lasting reconciliation in the region.”

The citizens of Pristina have decisively backed a regional approach to truth-telling, rather than a national one as in the proposed Commission for Truth and Reconciliation in Kosovo.  The procedure for the establishment of a Kosovo commission was set in motion by the President of Kosovo, Hashim Taçi.

The citizens of Banja Luka have chosen to disregard the appeals of certain local associations (all of them funded by the RS Government) not to sign “a petition aimed against the Serbs”, and to place their trust in RECOM instead.

The support of the citizens of Sarajevo for the establishment of RECOM was never in question. Their motive has always been “to know the name of each victim, and have their voices heard throughout the region.”

At the height of the election campaign in Croatia, the support of the citizens of Zagreb for RECOM has clearly demonstrated their view that Croatia, being an EU member, has a political and historic obligation to participate in the public acknowledgment of all the victims of the wars following the breakup of the former Yugoslavia.

The campaign also marked the first time the citizens of Presevo in Southern Serbia were able to participate in a regional, victim-centered process.  They too regard a regional approach to be the most credible guarantee of public acknowledgement of all victims (‘ours’ and ‘theirs’).

In Serbian towns and cities – Belgrade, Novi Sad, Zrenjanin, Subotica and Nis – the signature campaign reaffirmed strong grassroots support for RECOM.  For ordinary Serbian citizens, the establishment of RECOM is understood as an obligation of the state and its current leadership.

The RECOM Coalition brings together more than two thousand civil society organizations and individual members – artists, academics, writers, lawyers and journalists, among others, from all post-Yugoslav countries. Between 2007 and 2011, the Coalition conducted a consultations process which engaged some 8,000 individuals from different sections of civil society around the idea of facing the past regionally.  These debates gave birth to the Draft RECOM Statute Proposal, outlining the goals, tasks and basic activities of a future inter-state commission. In May of 2011, the Coalition organized a four-day signature collection campaign for RECOM, in the course of which 550,000 citizens from all post-Yugoslav countries signed the petition for the establishment of RECOM.  In May 2013, the region’s Presidents/B&H Presidency Members appointed their personal envoys for RECOM.  The envoys analyzed and deliberated on the Draft Statute Proposal for eighteen months, before submitting to the Coalition their Amendments to the RECOM Statute, on October 28th, 2014.  At its assembly held on November 14, 2014, the Coalition adopted the document in its entirety without any objections, and expressed the view that “all the formal conditions for the establishment of such an inter-state commission have been met”.

In order to help the future commission carry out its mandate to document all wartime detention sites and create a registry of all civilians and combatants who lost their lives or disappeared in connection with the war (as foreseen by the Statue), the Coalition had, by December 31st, 2016, taken more than 17,000 statements from witnesses and victims’ relatives, andgathered some 12,000 victims’ photographs and more than 30,000 documents relating to the context and circumstances of their death or disappearance.  Drawing on these sources, to date the Coalition has been able to establish the identities of 23,000 war victims (out of a total of 130,000, both civilians and combatants) and the circumstances in which they lost their lives or disappeared in connection with the wars following the breakup of the former Yugoslavia from 1991 until 2001.

By the end of 2016, the Coalition had documented 630 detention sites and prison camps in B&H (out of  a total of around 1,500 known sites), where more than 170,000 people were imprisoned during the war.  More than half of those detained at these sites were civilians.

The International Criminal Tribunal for the Former Yugoslavia itself has established the identities and circumstances of deathof at least 18,000 victims of war crimes.

In their conversations with the campaign activists, many people expressed a commonly shared view that the time has come for the states in the region, through their support for RECOM, to complete the remaining work on establishing the identity of each of the 130,000 victims of the war and the circumstances of their death or disappearance.

Citizens of post- Yugoslav states expect from their leaders to express support for including the initiative of establishing “RECOM – Regional Commission Tasked with Establishing the Facts about All Victims of War Crimes and Other Serious Human Rights Violations Committed on the Territory of the Former Yugoslavia in the period from 1991-2001“ in the agenda of the upcoming Western Balkans Summit in Trieste on July 12, 2017 and to take concrete steps for reaching the official agreement for establishing the “Commission” at the next Summit planned in year 2018.

*The street campaign was supported by Rockefeller Brothers Fund