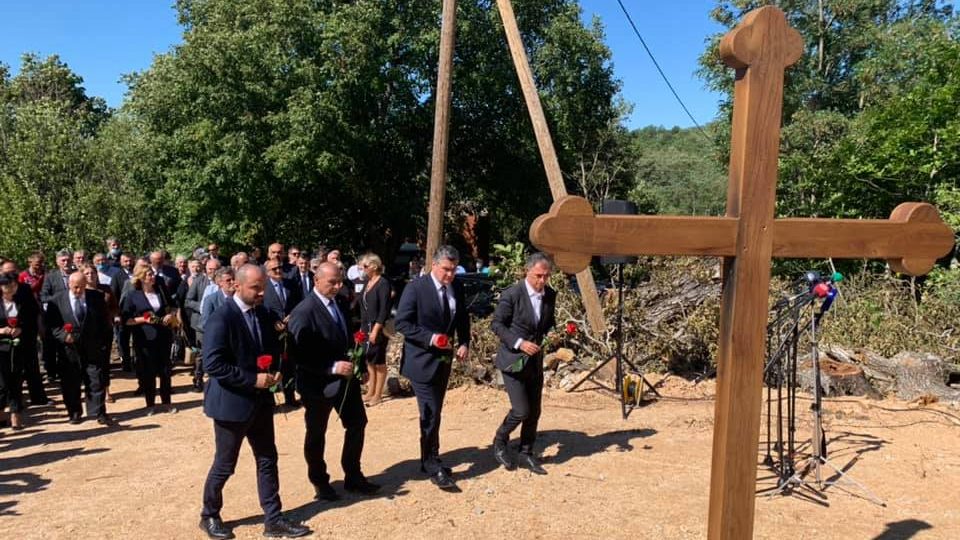 Croatia’s president, war veterans’ minister and representatives of the country’s Serb minority commemorated the 25th anniversary of the killings of six Serb villagers in Grubori in the wake of the Croatian Army’s Operation Storm.

President Zoran Milanovic and War Veterans Minister Tomo Medved, along with two Croatian Serb politicians, MP Milorad Pupovac and Deputy Prime Minister Boris Milosevic, gathered on Tuesday in Grubori, a hamlet near the village of Plavno, to mark the 25th the anniversary of the massacre of six Croatian Serbs.

The commemoration started in Plavno, near the town of Knin, and continued in Grubori at the recently-erected cross for the victims who were killed during a police raids in the wake of the Croatian Army’s Operation Storm, which defeated rebel Serb forces.

“No one has the right to walk into a village and kill six innocents. Everyone responsible for the crime must be punished, and every victim recognised, regardless of nationality. It is time for hatred to stop and not be passed on to a new generation,” Milosevic said.

“Croatia mourns all civilians and it is our duty to pay tribute to the innocent victims,” Medved said.

Twenty-five years after the massacre, no one lives in Grubori anymore, and no one has yet been held responsible by the courts.

Although the judge said that “it is indisputable that six elderly people were killed and that these killings were committed by members of the Lucko [police] anti-terrorist unit”, the court decided that there was no evidence that the defendants were guilty.

The ‘anti-terrorist’ operation, involving 560 special forces policemen, took place just after Operation Storm, during which the Croatian military seized back parts of the country that had been under rebel Serb control.

The operation was meant to secure the passage of a ‘Freedom Train’ from Zagreb to Split via Knin, which carried President Franjo Tudjman, who was giving speeches at various stops to praise the Croatian Army for ‘liberating’ the area.

Ivan Cermak, who was the military governor of the Knin area at the time, was cleared of responsibility for the crimes in Grubori by the International Criminal Tribunal for the Former Yugoslavia in 2011.

The UN-backed court ruled that he could not be held accountable for failing to prevent the crimes or punishing the perpetrators, although he had covered up the crimes in the media.

Mladen Markac, a Croatian general who was deputy defence minister at the time of the killings and who was also acquitted of war crimes by the ICTY, was among those who defended the operation during the lengthy trial of the Grubori suspects in Zagreb.

During Operation Storm, Croatian forces retook 18 per cent of Croatian territory which had been controlled by rebel Serbs since 1991, practically ending the war in the country.

During and in the aftermath of the operation, some 600, mostly elderly Serb civilians were killed, while around 200,000 Serbs left Croatia.

On August 5, Croatian leaders staged a ceremony to celebrate the 25th anniversary of Operation Storm, which Prime Minister Andrej Plenkovic said was Croatia’s “greatest victory”. However he expressed sympathy for all the victims, “not only Croats but also Serbs”.

Milosevic also participated in the state celebration. He said beforehand that he could not forgive the crimes that were committed, but was determined to do what he could to help Croatia’s Serb minority.