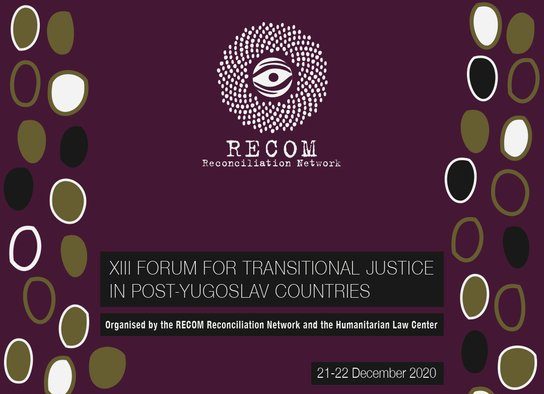 The 13th Forum for Transitional Justice in post-Yugoslav Countries was held on Monday and Tuesday, 21–22 December 2020, for the first time as an online event, organized by the RECOM Reconciliation Network and the Humanitarian Law Centre.

The conclusion from the first panel can be summarized in the message stating that despite the crisis of transitional justice—which among other things is reflected in the lack of political will and decades of refusal of responsibility for crimes committed, and the negative impact of social and political changes on the process of building peace—civil society in the region of the former Yugoslavia cannot give up on the social need for establishing transitional justice. There was also mention of the significance and achievements of apologies and reparations for the processes of reconciliation and different, previously insufficiently discussed aspects of retributive justice and limits of common approaches to such problems, as well as the need for new perspectives. The panelists agreed that civil society should continue to insist that the implementation of transitional justice has already been recognized as a priority and one of the key conditions for the countries of the Western Balkans to ascend to the European Union.

The second panel addressed the topic of memorialization. In their presentations, the panelists mapped out the key points of remembrance policies and cultures in Bosnia and Herzegovina, Croatia, Serbia, and Kosovo, with special focus on the commemoration of the victims of certain war crimes committed in this region during the 1990s. There was mention of the issue of culture of impunity, remembrance industry, and the opportunities for revising and changing seemingly already fixed dominant nationalist narratives. One of the conclusions of the panel was that pluralist remembrance and overcoming ethnical and religious segregation of victims are crucial for the contribution of memorialization to the reconciliation processes.

The panel on missing persons started with a chronological overview of the process of searching for mass graves and mortal remains, from the 1990s to the present, and it ended with a conclusion regarding the necessity for strong political will, regional and international cooperation, so that the fates of another 10,170 persons missing in the 1990s wars might be resolved through inspections of previously exhumed locations and information on new mass graves and individual gravesites. RECOM Reconciliation Network coordinator pointed out that the process of documenting missing persons cases in Kosovo—which is being carried out by two members of the regional network—indicates that the mortal remains of most missing persons were found in exhumed mass graves, but that there are significant reasons to reexamine the mass graves. She added that there is a large number of persons who went missing in the zones of responsibility of units whose presence and activities has been established in the proceedings before the ICTY, and that national institutions are in possession of information regarding the locations of these mass graves, as well as that there is a significant number of missing persons whose mortal remains have been to a great extent destroyed by incineration or other processes aimed at covering up evidence of the crimes committed.

Each of the panels at this year’s online Forum had about 80 attendants, some of which also joined in the discussion. They too asserted that it is unacceptable that the topics of war crimes, justice, fates of missing persons and remembrance culture have been marginalized, both politically and in the media.