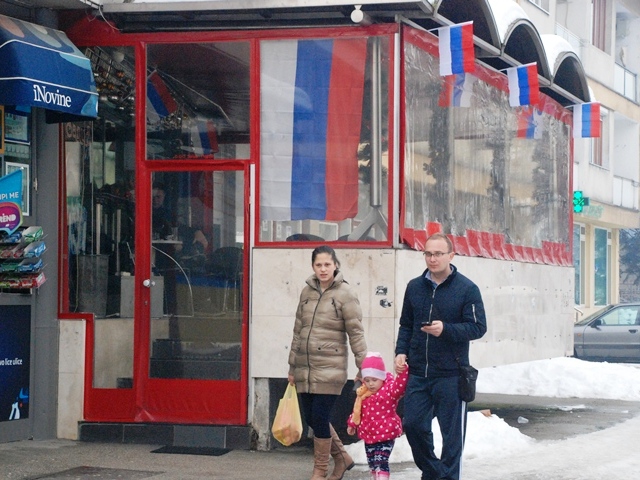 “What good can come of this?”

Amela, a Bosniak resident of Prijedor in the country’s Serb-dominated Republika Srpska entity, was worried by the nationalist speeches, the ceremonies and the rest of the clamour around the biggest-ever celebration of January 9 – the Bosnian Serbs’ controversial Republic Day.

“I am just contemplating how to get my kids out of here. After all of this, I am even more convinced that they should go – as far away from here as possible,” Amela told BIRN.

For years, the Bosniaks, Croats and Serbs who live side-by-side in the town of Prijedor in the north-west of Republika Srpska have been trying to circumvent the ethnic tensions that usually accompany such showpiece events.

But the task proved particularly hard this year, since Republika Srpska was openly defying Bosnia’s Constitutional Court, which had ruled that the holiday was discriminatory towards non-Serbs and thus unconstitutional.

The entity’s government decided to go ahead with the spectacle anyway, boosting Serb nationalist feelings across Republika Srpska, triggering anger and condemnation from Bosniaks and Croats across the country, and testing the fragile co-existence in the few remaining multi-ethnic areas such as Prijedor.

Prijedor’s local government was told to hoist Republika Srpska flags and other decorations on all the main streets and public buildings.

This year many Serb residents decided to follow suit and put up flags on their houses and apartment buildings, but local shops – unaccustomed to such demand – had only limited number of flags.

Many locals came to a Prijedor gift shop in the hope of buying large flags, but to no avail.

“Unfortunately we don’t have big flags, only the small ones. I keep them for weddings [because] people buy them to put them on their cars,” the shopkeeper told her eager customers apologetically.

“This should become the tradition for every January 9 in the future. It is nice to see our flags here and there. I don’t understand how anyone could stop us celebrating our day,” she added.

The Republika Srpska government, as well as political parties from the ruling Bosnian Serb bloc, organised a flurry of events on Friday and Saturday, in the entity’s administrative centre of Banja Luka, but also in all the other bigger towns.

In the centre of Prijedor, young activists from one of the ruling Serb parties were distributing postcards with mocking caricatures of High Representative Valentin Inzko, the top international official in Bosnia and Herzegovina, who has been repeatedly criticised by Serb politicians.

They were asking locals to sign the postcards and mail them to Inzko directly.

“What should I write down?” one woman asked.

“Write to him to go home,” the young activists answered.

In another square, two young women, both wrapped in Republika Srpska flags, were handing over pocket calendars, small paper flags and T-shirts with the slogan “Celebrating the Republika”.

“The same thing is being organised all over Republika Srpska and it is sponsored by the government,” one of them explained to BIRN.

“The government paid the agency, the agency engaged us, and RTRS (Republika Srpska’s main radio and television station) will broadcast it tomorrow,” she said.

An elderly Serb spoke approvingly of the Republic Day events, which commemorate the founding of Republika Srpska in 1992 – one of the events that foreshadowed the outbreak of the Bosnian war later that year.

“We should keep up the tradition. In the end, we struggled to get Republika Srpska and we must maintain it,” he said.

“I lost my son and two brothers during the war, so I hope it wasn’t for nothing,” he added.

But many non-Serbs in Prijedor were concerned about such an overt display of nationalist sentiments.

Until the war, Prijedor was a prosperous industrial town with some 110,000 inhabitants, of which Bosniaks and Serbs made up some 43 per cent each, with the rest including Croats and other ethnic minorities.

But at the beginning of the conflict, Serb paramilitary units ethnically cleansed the entire region of non-Serbs, killing a total of 3,173 Bosniaks and Croats in the process.

Out of around 50,000 non-Serbs who fled the area during the war, some 23,000 have since returned. Others established new lives abroad, but many of them kept their houses and apartments in Prijedor and still visit them, especially during the summer.

This fragile coexistence has made different ethnic groups in Prijedor more aware of and sensitive to each other’s views and fears.

As a result, the city administration and local people usually try to quietly but carefully circumvent big, ethnically-divisive holidays – such as the Republika Srpska day or Bosnia’s Independence Day – in an attempt to avoid fuelling nationalist sentiments.

Yet, the tumult caused by the entity-wide ceremony on January 9 was almost impossible to avoid this time, even in Prijedor.

However local representatives of Bosnia’s Islamic Community remained tight-lipped over the celebrations and declined to offer any comments.

Representatives of the local Catholic Church, which represents most of the few remaining Croats in the Prijedor area, also downplayed the event.

“This date means nothing to me,” a local Catholic priest, Marko Vidovic, told BIRN.

“I am disinterested in state holidays, and that’s all there is. But if you asked me about Christmas and Easter, then I would be interested,” he said.

One of the few local Bosniak officials in Prijedor to speak openly about the celebrations was Mirsad Duratovic, the head of the local association of concentration camp survivors and a deputy in the municipal assembly.

Republic Day celebrates Republika Srpska as a political entity, Duratovic argued – but not as a home for everyone who lives there.