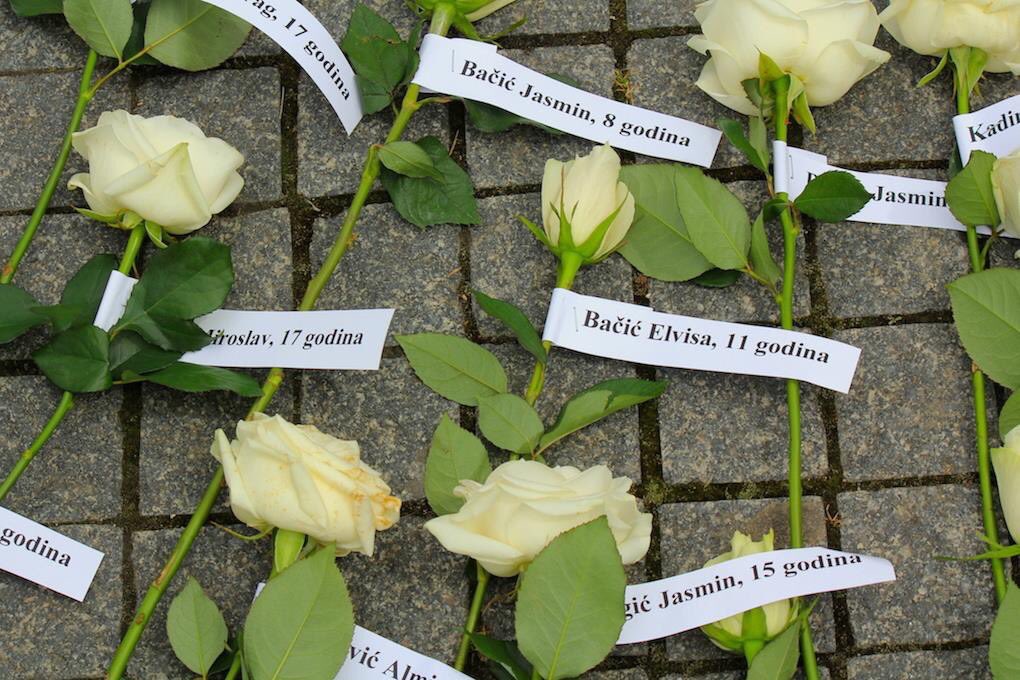 When Satko Mujagic puts on a white armband Saturday in the Netherlands, he will be doing so in memory of his great-grandmother, his professor and a friend — who were among more than 3,000 civilians murdered by Bosnian Serb forces in Prijedor in northwestern Bosnia during the 1992–95 war.

Thousands of Bosnians and Herzegovinians will be doing the same across several continents, with large gatherings planned across Europe, the United States and Australia.

They will be marking a painful chapter in Bosnian history, but also highlighting the need to fight genocide denial and remembering victims of persecution anywhere in the world.

On the last day of May 1992, after a forceful takeover of the municipal government, Bosnian Serb authorities issued a decree on local radio ordering all non-Serbian citizens to mark their houses with white flags or bedsheets and to wear white armbands when leaving the house.

Tens of thousands of family members of those forced to wear white armbands had been detained in some of the most notorious camps established during the war in Bosnia — Omarska, Keraterm, Manjaca and Trnopolje.

“Forcing people to wear white armbands was the last symbol of genocidal intent. White armbands signify that even those who were not forced into camps or killed had to be marked. It is very important to mention those people as well,” Mujagic said.

The 42-year-old immigration worker, who survived seven months of internment and torture in Omarska and Manjaca in 1992, said the white armbands are a symbol of genocide because they recall the time when Jews were forced to wear the Star of David in World War II.

The International Criminal Tribunal for the Former Yugoslavia (ICTY) in The Hague has sentenced several Bosnian Serbs to prison terms, some of them decades long, for war crimes committed in and around Prijedor.

Pictures of emaciated prisoners of war behind the barbed wire of Omarska and Trnopolje camps shocked the world in August 1992, when journalists Roy Gutman, Ed Vulliamy and an ITN film crew reported from the camps.

Survivors would later tell the Hague tribunal of horrific acts of torture, rape and murder committed in the camps. Victims included dozens of women, the tribunal heard.

‘Because it concerns me’

In 2012, ahead of the 20th anniversary of the white armband decree, Prijedor activists formed the Stop Genocide Denial group, aiming to raise awareness of Worldwide White Armband Day.

Prijedor Mayor Marko Pavic, of the Serb Democratic Party — the same political party that issued the 1992 white armband decree — publicly declared in May 2012 that genocide had not happened in his city. He forbade a gathering of survivors, who wanted to lay red roses and white bags in the city center on May 22 in remembrance of 266 women and girls killed in Prijedor. On May 31, police patrolled the streets looking for anyone handing out white armbands, survivors said.

A year later, on May 31, 2013, young people of all ethnicities from across Bosnia and Herzegovina and neighboring countries gathered around the initiative “Jer me se tice,” which translates to “Because it concerns me,” traveled to Prijedor’s center to mark White Armband Day.

Pavic publicly called the gathering “a celebration” and “just a gay pride march.” The Helsinki Committee of Human Rights in Republika Srpska, one of the entities of Bosnia and Herzegovina, promptly called on him to apologize to survivors and victims’ families.

The committee said in a statement that Pavic had trampled on his own words from an ICTY conference in 2005 in Prijedor. At the conference, Pavic had said: “We have to face truth and justice … condemn evil and show our sympathy to the victims … The truth needs to help us in never repeating that which isn’t good.”

Reflecting on municipal authorities’ lack of willingness to face the past, Prijedor activist Emir Hodzic, 35, one of the initiators of Stop Genocide Denial and Jer me se tice, said: “Unfortunately, this year we won’t see a big move forward.”

“Prijedor authorities, the mayor, are simply people who are not prepared to change their politics, and [instead] see activists from Prijedor and elsewhere as provocateurs, Bosniak extremists, etc. The fact is that the majority of our activists are not even Bosniak. But the authorities have an answer for that as well. They say: ‘Those are not real Serbs. They are traitors.’ It always comes down to that,” Hodzic said.

He added that members of the initiative regularly visit other wartime camps, where citizens of all ethnic groups were tortured and killed, in memory of all victims regardless of their names.

Pavic did not answer calls in time for publication.

Despite the political leaders’ views, activists are seeing a change among Prijedor’s citizens, Hodzic said.

“Last year, when we laid flowers in the city square and the various activists returned to their cities, nobody removed the flowers. Those flowers were laid together with the names of murdered children. My cousin, who passed by the square after the commemoration, saw a man walking by with a small child and the child asked: ‘Daddy, what is this?’  The man explained it was something from the past. So, people are in fact facing up to it.”

In October 2013, one of the largest mass graves from the war in Bosnia was discovered at Tomasica in the Prijedor municipality by the International Committee for the Missing Persons. According to witnesses, it contains the remains of more than 1,000 Bosniak and Croat victims killed by Serb forces.

A mass burial of hundreds of the victims’ remains will be held on July 20.

Hava Tatarevic from Zecovi, near Prijedor, will bury the remains of her six sons and husband – one of several cases of almost an entire family being murdered in the Prijedor area.

“Certainly, with the discovery of Tomasica, people are talking about these war crimes more and more,” Hodzic said. “It is still something that can’t be avoided. I still believe that ordinary citizens of Prijedor would not have a problem in mentioning war crimes if the current local authorities were not the way they are. The problem is with the authorities, not the citizens of Prijedor.”

Mujagic, who started a Facebook group called Guardians of Omarska, highlighted the need to face up to the horrors of the past.

“One of the main points is that survivors see that not everyone is the same and stop hating a whole people. So they can say, someone from that ethnic group tortured and beat me and they should be jailed. But some other child ‘X’ or person ‘Y’ is not to blame and I won’t hate them. I won’t be the same as the one who did that to me,” he said.

“The other is glorifying the past. It is important to understand that myths should be broken and to realize that Prijedor was not the site of the ‘war of liberation and defense’ as it stands on the monuments, but the aggression towards everything non-Serb. Those white armbands are a symbol of fascism.”

While he became an activist in 2003 in memory of his lost family, friends and Prijedor citizens, Mujagic’s driving force today is reconcilliation.

“I want my two young daughters to be able to come to Prijedor and that no one lookes at them differently. Maybe it won’t happen in my lifetime, but it might in 100 years,” Mujagic said.

Hodzic believes the question of transitional justice and reconciliation with the past shouldn’t be about money or projects.

“We are talking about universal human values, or laws agreed on as guiding principles of progress, or social evolution,“ he said. “When we break those laws, when we murder children and rape women, and put those crimes in the context of war, and therefore justify it, we are failing as a species, we have failed as a human race.”

“Putting aside the question of ethnicity, nationality and other abstract political notions, we are failing as social animals and are preparing the next generations to repeat our mistakes. Our driving force isn’t recognition among donors and capitalist investors in the industry of human rights, but the need to have our voices heard, and to let the political elite know that they cannot stop the social evolution, they cannot kill an idea whose time has come,” he added.

“We have to fight any ideology that has sponsored genocide and crimes against humanity, and is denying the victims the right to remember. There is no idea or ideology that can justify killing children and rape. A murdered child has no ethnic prefix, and there is no ‘but.’”