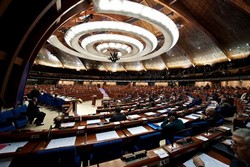 Strasbourg, January 26, 2011 – A report on the protection of witnesses in war crimes cases tried before national courts in post-Yugoslav states and the process of reconciliation in the region was submitted by Jean-Charles Gardetto, Pietro Marcenaro, and Miljenko Dorić.

At the beginning of the debate, the special rapporteur Gardetto said that the protection of witnesses in the Western Balkans was still unsatisfactory.

“Witnesses are being threatened, they are being declared traitors, and even assassinated”, said Gardetto, submitting the report which calls upon the international community, Serbia, Croatia, Bosnia and Herzegovina, Montenegro, and Kosovo to improve the protection of witnesses testifying in war crimes trials conducted before national courts.

Gardetto stressed that it was necessary to provide an efficient and continuous physical, legal, and logistic protection for witnesses prior to the beginning of the trial, during, and after the trial. In his opinion, it is necessary to implement measures that had already been adopted by the Council of Europe, but he also proposed the creation of a study on a new convention on the protection of witnesses.

In his explanation of the proposed resolution on reconciliation in the Western Balkans, Miljenko Dorić said that there could be no true reconciliation until all of the accused were brought to justice.

He emphasized that over the years many countries in the region have adopted agreements that facilitated criminal prosecution or the process of extradition of those accused of war crimes, but that the problem lay in the fact that many third countries, for various reasons, refused to extradite war crimes suspects staying on their territory.

Mr. Dorić mentioned that some of the third countries in question had not signed the convention adopted by the Council of Europe, promoting the culture of peace also advocated for by the United Nations.

In elaborating the resolution on reconciliation and political dialogue between the countries formed on the territory of the former Yugoslavia, Pietro Marcenaro emphasized the importance of the cooperation between the president of Serbia Boris Tadić and the president of Croatia Ivo Josipović, stating it should be an example for the entire region.

Mr. Marcenaro also said that it was necessary for the Parliamentary Assembly of the Council of Europe to offer its support for the initiative to create a regional truth commission (RECOM) which had already mobilized 900 non-governmental organizations in the region, in order to include the general public and to make sure that the process is not exclusively based on voluntary work.

According to Mr. Marcenaro, there is a significant progress in the reconciliation process in the Balkans, but there are still many problems and unsolved issues, most prominent of them being the fact that some war crimes suspects are still at large, that the fate of 15, 000 missing persons is still unsolved, and that the issue of as many as 450, 000 refugees and dislocated people remains unsolved.