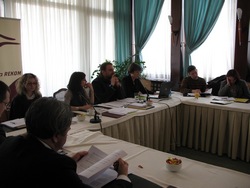 On March 22, 2011 the Peace Institute from Slovenia organized a consultation with representatives of the civil society in Slovenia on the establishment of the Regional Commission Tasked with Establishing the Facts about War Crimes and Other Serious Human Rights Violations Committed on the Territory of the Former SFRY in the Period 1991-2001 (RECOM).

The participants expressed their support for the efforts of the Initiative for RECOM to establish an international commission on the territory of the former Yugoslavia and emphasized that a regional approach is the most adequate method to research war crimes and other serious human rights violations that took place in the 1990s. Representatives of the associations of the erased stressed once again the importance of the regional commission which may give a serious contribution to a moral satisfaction of all victims from the entire territory of the former Yugoslavia by employing public hearings of victims and witness, research and investigation, and the insistence on the moral responsibility of state officials. An important conclusion of the debate was that the future inter-state commission, on the grounds of the establishment of facts, may be successful in building a foundation for future historical interpretations of wars and events that ensued shortly after those wars. Various interpretations of historic events are always welcome in democratic societies, but they must be generated in the sphere of unquestionable facts. In that sense, RECOM may give a serious contribution to the change of public opinion on atrocities committed during the war and help motivate societies to stand up to the manipulation of victims for political purposes and to the war crime denial culture. In the opinion of the participants, the consultation process of the Initiative for RECOM itself, which had been carried out for a couple of years through the entire region of the former Yugoslavia, is important for younger generations and their understanding of the recent history. It can also help decrease the intensity of hate speech in all states in the region.

As in previous regional and local consultations, in a dynamic but very constructive discussion, the participants of the consultation in Slovenia gave their opinions and comments with respect to the Draft RECOM Statute, which was presented by Marijana Toma, member of the working group tasked with the compilation of the Draft RECOM Statute. This consultation proved that it was indeed necessary to include the issue of the erased as one of “serious human rights violations” to be investigated by the future commission.

In the course of the consultation a number of individuals and organizations joined the Coalition for RECOM. The Coalition for RECOM will present the Statute of the future regional commission to governments and presidents/presidencies of states formed on the territory of the former Yugoslavia. More information can be found at: www.zarekom.org.

The President of the Parliament of the Republic of Slovenia Pavel Gantar and two members of the European Parliament, Tanja Fajon and Jelko Kacin, expressed their support for RECOM, which is the first political support RECOM received in Slovenia.